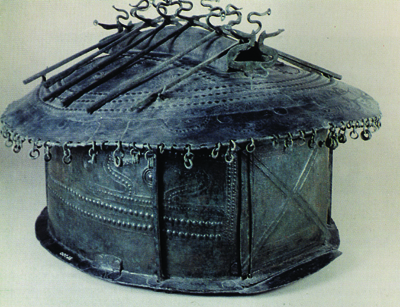 Three hut-bases, cut partly into topsoil, partly into the soft tufa bedrock, were discovered on the western edge of the Palatine Hill, in the heart of historic Rome, during excavations under Dante Vaglieri in 1907. The site was then excavated and recorded more systematically in 1948.

The remains – remarkably unprepossessing amid the spectacular ruins of classical Rome all around – comprise postholes, wall-slots, and drainage gullies, defining three small structures. The best documented was an oblong building 4.9m by 3.6m with slightly bulging sides. The main walls were built using seven posts, four for the corners, three in intermediate positions, and there was also a small porch, formed of two further posts, in front of the door. In the centre of the hut was a hearth.

The Palatine Huts are similar to others of 9th-7th century BC date found elsewhere in Rome and at other Latin sites. Moreover, the ground-plan is matched in form by contemporary ceramic (and occasionally bronze) funerary urns. These little ‘houses of the dead’ can be safely assumed to mimic the appearance of the contemporary huts of the living. It is likely, therefore, on the basis of this evidence, that the huts had sloping thatched roofs supported on heavy projecting rafters, and walls of wattle and daub.

No doubt other huts lie unexcavated beneath later classical buildings on the Palatine, as they are also known to do on some of the other hills of Rome. These hilltop hut villages may have been surrounded with palisades. They were certainly associated with extramural cemeteries. The occupants of the Palatine were laying their dead to rest in a cemetery at the base of the hill, just clear of the surrounding marsh. During the life of the village, inhumation replaced cremation as the main rite, and by c.750 BC, the dead were being interred in trenches along with ceramic jars containing food and drink.
The Palatine was a highly defensible site: not only was it a steep-sided hill, but it was protected by the River Tiber and associated marshes covering the area where the Roman Forum would later be laid out.

In neither the villages nor the cemeteries of the period is there much evidence of social differentiation or cultural sophistication. These early Latin communities were formed of Iron Age farmers and herdsmen, and their settlements were no more than defended villages.