Not since Howard Carter looked upon the face of Tutankhamun in 1922 has a tomb been found intact in the Valley of the Kings. Until now. Susanne Bickel reveals how she and her team came across the tomb of an Egyptian chantress, who had lain undisturbed since her burial nearly 3,000 years ago. 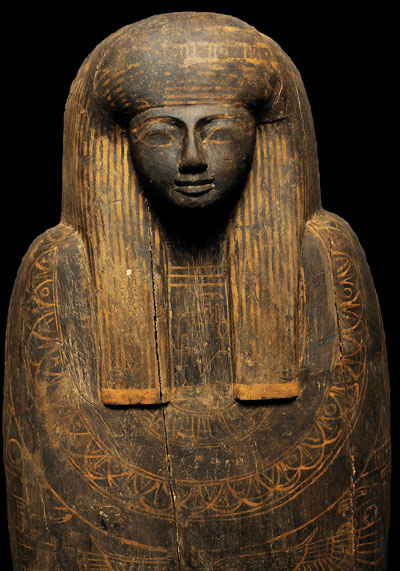 It was January 2011 and, unknown to us, the eve of the Arab uprising in Egypt. We were investigating an area in the Valley of the Kings of Upper Egypt that contained non-royal tombs, and had come across what looked like a man-made feature close to the entrance of the burial chamber identified as KV 40. But all we could do was secure the structure and leave it until excavations resumed the following year.

We were concentrating on 11 tombs in a side valley that leads to the tomb of Thutmosis III, where several structures remain unexplored. During the early phases of the Valley of the Kings, royal permission was often granted for tombs to be built for members of the king’s entourage, his family, friends, and even some high officials. Indeed, two thirds of the tombs in the Valley of the Kings are non-royal.

In the past, such burial places were often given scant scientific attention – possibly because they are not as pretty as the royal tombs, which have beautifully decorated walls inscribed with texts referring to the king’s netherworld journey. Non-royals may have been granted the privilege of being buried next to the king, but they were not allowed any wall decoration or inscriptions.

The University of Basel Kings’ Valley Project – in cooperation with the Egyptian Ministry of State of Antiquities – was set up in 2009 to answer these key questions. Who was buried in these tombs? What date can be assigned to the use of this area as a non-royal necropolis? Was a specific type of architecture used for these tombs, and if so, does it reflect the social status of the tomb’s owner?

The structures we are investigating can now be dated to the mid-18th Dynasty (14th century BC) during the reigns of Amenhotep II, Thutmosis IV, and Amenhotep III. Furthermore, we know from the quality of the fragmentary remains of burial goods that the people buried here were of a high social status.

Most of the tombs are accessed through shafts that vary between 4m and 8m (13ft-26ft) in depth. These shafts need to be secured, not only for the protection of the tomb and its contents, but also for the safety of people who come into the area. It was while preparing the surrounding surface for the installation of such a structure over the opening to the shaft of KV 40, that the three edges of the rectangular feature were spotted 1.5m (5ft) to the north of it.

Discovering the tomb
In January 2012, we were given permission to return to excavate this enigmatic structure. Almost immediately, we came across a shaft filled with dry sand and covered to a depth of about 2.40m (7.9ft) beneath its upper rim by a layer of large stones. These stones blocked the entrance to the tomb – a clear indication that the burial, now given the title KV 64, was in its original state and had escaped the attention of grave robbers.

The interior of the tomb is a modest-sized single chamber measuring 4.10m x 2.35m (13ft 6ins x 7ft 8ins). A thick layer of limestone chips covered the floor, and on this layer stood a large dark sarcophagus and a painted stele measuring 27.5cm by 22.5cm and 2 cm thick (11ins by 9ins and an inch thick). These were the only objects of this intact burial. On the sides of the coffin are inscriptions painted in large yellow hieroglyphs identifying the person buried here. She is the Chantress of Amun: Nehemes-Bastet.

A text written on the legs section of the coffin lid informs us that her father was a priest in the great temple of Karnak. The coffin’s typology as well as the names and titles indicate that Nehemes-Bastet lived around the middle of the 9th century BC, during Egypt’s 22nd Dynasty – more than 500 years after the period during which these tombs were built for the pharaohs’ entourages.

A thick layer of dust covered the lid of the coffin but when it was cleaned, we could clearly see it was a pretty example of a rather rare type. It is made of several solid pieces of sycamore wood painted black. A broad collar and several mythological scenes are painted in yellow over the lid, and funerary prayers are inscribed on the sides of the coffin base. The sarcophagus has no elaborate inner coffins – as found in similar burials, for example that of the chantress Meresamun, acquired by James Henry Breasted in 1920 and now on exhibition at the Oriental Institute of Chicago – but it was certainly expensive, and thus indicative of her high status.

The mummy inside the coffin was carefully wrapped in a linen shroud, with a number of linen straps around her body. During the funerary ceremonies her mummy had been covered with a dark resin substance, a ritual often practised but for what purpose we still do not understand.

Nehemes-Bastet was clearly interred here as a secondary burial during a phase of reuse of the tombs in the Valley of the Kings. While we were aware that tombs were reused, KV 64 is the first intact example of a burial dated to this period. Furthermore, it provides us with the only known example of this type of wooden stele to be found in its original context. Painted stelae like that of Nehemes-Bastet can be seen in museums, but none has been documented in situ.

The stele of Nehemes-Bastet was set against the west wall of the tomb chamber, slightly turned towards the face of the coffin. The painting, which is of exquisite quality, depicts the lady wearing a fine linen dress, a large black wig, and a lotus flower on her head. She stands in the attitude of prayer in front of a seated god, enthroned over a piece of desert landscape. The falcon-head god with the disc of the sun god represents Osiris, god of the underworld: the inscription makes reference to gods of the sun and the afterlife, fused here into one entity, and an offering table with food (bread, onions, a duck) and flowers stands between the god and the lady.

The title ‘Chantress of Amun’ identifies Nehemes-Bastet as a woman of a high social status from a family of priests at the wealthy and influential temple of Karnak. The exact scope of her duties is still unknown, though she probably took part in the rituals associated with feasts for the god Amun, perhaps accompanying the processions of the god with music in a choir of elegant ladies.