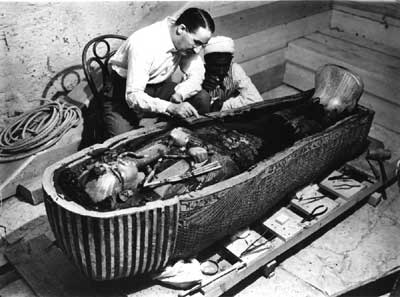 It is no exaggeration to say that the discovery of Tutankhamun’s tomb is firmly established in the collective consciousness of mankind and has affected high as well as low culture everywhere. Tutankhamun’s gold mask is one of the most readily recognized icons of the modern world.

Yet all this hype conceals one of the best kept secrets in Egyptology. Although the three volumes of Carter’s The Tomb of Tut.ankh.Amen (the first written jointly with Arthur Mace) provide an excellent overview of the discovery, the majority of Tutankhamun’s objects have not yet been fully studied. The information about Ancient Egypt which they provide remains difficult to access. To date, only some 20% of the material has been the subject of detailed scholarly study and publication.

The monographs published by the Griffith Institute are worthy and exemplary in their scholarship but few and far between. If Egyptologists keep up the present rate of progress, it will take another two hundred years before the information is fully available. Is this the decisive proof that the curse of the Pharaoh does exist?

The reasons for this unsatisfactory state of affairs are complex: Carter’s physical and mental exhaustion after ten years of intensive work in the tomb, his understandable intention to publish his discovery himself, his personal isolation and strained relations with the Egyptological establishment, and the illness which cut his career short. The work in the tomb was completed in 1932; Carter died in 1939. Other difficulties have been due to the exceptional character of the discovery, with its high proportion of gold items and the resulting security complications, and the need for specialized knowledge, often other than purely Egyptological, on the part of researchers.

Howard Carter assigned 620 numbers, many of them further subdivided, to the 5,398 items found in the tomb. The main record of the excavation consists of some 3,150 handwritten object cards, sometimes accompanied by drawings, and some 1,850 black-and-white photographs taken by Harry Burton. There are also plans, excavation journals and Carter’s pocket diaries, as well as detailed records of conservation measures and several thousand pages of notes made in preparation of the final publication.

The Griffith Institute has decided to make all Carter’s excavation records available on its website. The tomb of Tutankhamun is one of the most famous discoveries in the history of archaeology, and it is clearly not acceptable for this information to remain unavailable. Its general appeal and importance makes it the spiritual property not just of specialists, but of all mankind. It is hoped that Egyptologists will accept the challenge and speed up the scholarly study of the discovery.

The project began some five years ago and is now in its final stages. The material is presented in the form of scans but also transcripts in order to allow for the whole database to be fully searchable. The project is called Tutankhamun: Anatomy of an Excavation and is on www.ashmolean.museum/gri/4tut.html. It is a team effort and Dr Jonathan Moffett, the ICT Manager of the Ashmolean Museum, is a vital contributor.

Between one and a half and two million items are consulted on the Griffith Institute’s website every month, and the Tutankhamun database accounts for most of them. The project will be completed in about a year’s time.