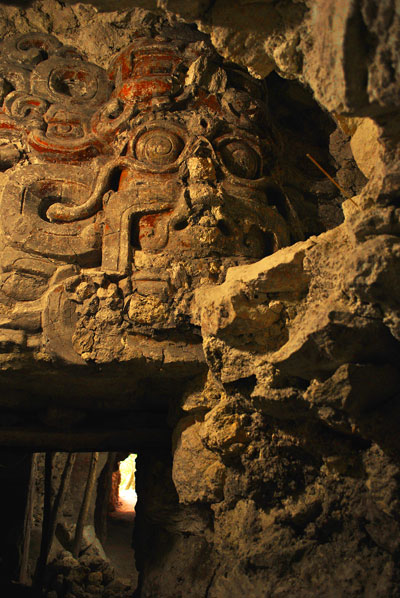 At sunset 1,600 years ago, the great Maya Temple of the Night Sun blazed across the landscape, set alight by the rays of the dying sun, the giant stucco masks along its western facade saturated a deep shade of red. To anyone watching the following morning, the sun would have appeared to be emerging from deep within it, rising behind the building from the horizon to the east. These dramatic effects were deliberate, with the temple designed by its Maya architects to have an impact on all who saw it, particularly their neighbours – and rivals – at Tikal.

The pyramid-temple, known today as El Diablo, is the largest of a group of buildings sitting high on an escarpment 525ft (160m) above the Early Classic Maya city of El Zotz, established in about AD 350. Its Maya name is Pa’Chan, which means either ‘Split Sky’ or ‘Citadel Sky’, and it looks out across a spectacular valley of the PetÈn Basin that connects the eastern and western Maya territories.

The site of El Zotz gets its name from the many bats who live in the caves of its escarpment (zotz is Maya for bat) and was first identified in the 1970s. It was already known to looters whose tunnels – some five-storeys deep – riddle a group of structures located about half a mile (1km) to the west. No-one remembers why this cluster was given the name El Diablo (‘the devil’): perhaps it refers to the hazardous climb required to reach its summit from the valley floor far below; or perhaps it was inspired by local rumours that a looter lies crushed within it.

The monumental architecture of this group of buildings suggests they formed a palace complex or acropolis. The pyramid-temple is the largest, rising 623ft (160m) above the valley floor. It comprises a solid platform base, 76ft by 85ft (23m by 26m), made up of two or three narrower terraces with the temple on top, and measuring 33ft (10m) in height. Trial trenches in the 1970s revealed the presence of coloured stucco ornamentation, so it was here that, in 2008, Stephen Houston and his team began to investigate further.

Excavation tunnels soon revealed glimpses of a series of stunning stucco masks standing 5ft (1.5m) high and representing different guises of the Maya sun god – an emblem associated with kingship – along the facade of the structure later identified as the Temple of the Night Sun. Both the shape of the building and the polychrome decoration are reminiscent of the Rosalila Temple of Copan.

Another, smaller building stands just in front of the great temple and it was while investigating this second structure that archaeologists made a startling discovery.

Houston and his team sunk a pit into the floor of the chamber and almost immediately uncovered blood-red coloured ceramic bowls. Carefully packed within were small packets of human fingers and teeth. They had been wrapped in an organic material – possibly leaves – that had since decayed, leaving an impression in the clay.

Below this there followed several alternating layers of flatstones and mud. More macabre ‘caches’ and other ‘offerings’ of textiles, carved wood, and, in one bowl, the remains of a partially burned baby, were discovered carefully placed in each of the mud bands. Deposits left closest to the lowest levels were laid out in a design that reflects Maya concepts of the cosmos, marking out the four main points of the compass and the centre of the world.

They came to the final earthen layer. Houston, who had been using a stick to probe for cavities, describes what happened next: ‘On this try, the stick went in, and in. After chipping away at the stone, I saw nothing but a small
hole leading into darkness.’

A light bulb was lowered into this hole and Houston was amazed to see ‘an explosion of colour in all directions – reds, greens, yellows’. The flatstones and mud of the layers above had created a tight seal so that little air or water could enter. As result, much of the organic material within the chamber had been preserved: wood, cord, thin layers of painted stucco, and even textiles – albeit the crystalised residue of the original cloth.

Almost immediately Houston was struck by a powerful stench of decay: ‘I poked my head in,’ he said. ‘To my astonishment, I caught a smell of putrification, and a chill went to my bones.’

The tomb belongs to an adult male, and was crammed with ceramics, textiles, and other ritual offerings. It was immediately clear from the quantity and richness of the grave goods, along with the grisly ‘caches’ in the layers above, that this was an individual of considerable importance. Arranged around him were the remains (in two cases, just the skulls) of six children, four of whom were infants, possibly killed in ritual sacrifice and placed in the tomb as offerings to the dead man.

Subsequent analysis of the man’s skeleton shows that he had reached his 50s by the time he died, and he was suffering from arthritic joints. He had been laid out on a raised bier that had since collapsed, and was dressed in the costume of a ritual dancer: an elaborate headdress lay by his head, and small ‘bells’ of shell with dog canine ‘clappers’ were arranged around his waist and legs. Such accessories can be found in Maya art in scenes depicting ceremonial dancers, but whether the man’s attire reflects his role in his past life or was in anticipation of his afterlife we do not know. His teeth were embedded with jewels, and in his hand was an obsidian blade – possibly a sacrificial knife – that tantalisingly showed traces of red on its edge. Laboratory tests are being carried out to identify the substance: so far, we can rule out blood and some red pigments.

Part of a name can just about be made out from glyphs on the back of a mirror, which translate as either ‘Red [missing] Turtle’ or ‘Great [missing] Turtle’. Given the extravagance of the burial chamber, Great Turtle clearly enjoyed high status. However, the proximity of the tomb to the Temple of the Night Sun, laden with royal sun symbols, leads the team to believe that Great Turtle was also the founding ruler of El Zotz, established in c.AD 350. The Maya believed that the sun was intimately linked with kingship, and symbols of the sun were grafted onto the identity of kings and the dynasties that would follow them.

Houston explains: ‘The word for “sun” is also the word for “day”, and this building is all about dynastic and cosmic beginnings, a grafting of universal origins with those of a dynasty. It celebrates the close linkage between the king and this most powerful and dominant of celestial presences. The sun was a key element of Maya rulership. It was an icon, which they linked very deliberately to royal lines, royal identity, and royal power. It rises every day and penetrates into all nooks and crannies – just as royal power presumably would.’

The Temple of the Night Sun was built to venerate the dead ruler. Once the ceremonies for the interment had been completed, the tomb was sealed, a platform created over it, and a roofed sanctuary built on top. Traces of burning were found, possibly from the use of incense, suggesting that rituals were frequently performed here. A doorway through the sanctuary leads to the Temple of the Night Sun behind it, and the El Diablo pyramid was later built over the top. The pyramid, explains Houston, with its steep sides and only accessible via one ridge, ‘anchors’ the high palace, creating a defensive citadel.