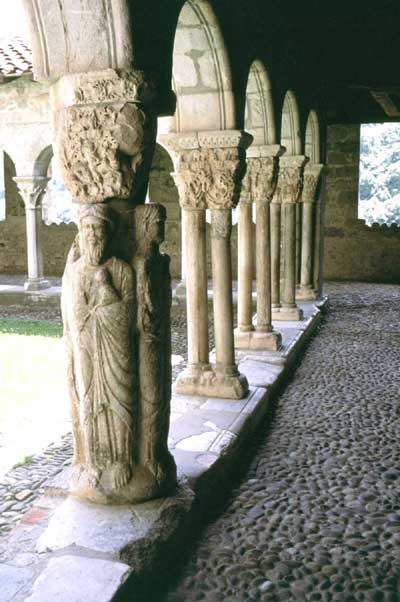 When was the decline and fall of the Roman Empire? Today we pose this as a rather different question: when were Roman towns abandoned? And side by side with this, when were the successor towns, often in defensible hillside positions founded? A classic example of this is the town of Saint-Bertrand-de- Comminges in south- west France where the Roman town was founded on the plain, but the successor town, with a marvellous cathedral, was founded on the hill-top above. When did the changeover take place?

Saint-Bertrand-de-Comminges must have one of the loveliest situations of any town in the Roman Empire. It is based on a low hill at the foot of the Pyrenees, near the point where the river Garonne emerges from the mountains – 60 miles south west of Toulouse, near the modern Saint Gaudens. In Roman times, the town of Lugdunum/Convenae was founded down in the plain and flourished until the late 4th century AD as one of the principal towns of the province of Novempopulana. However at the end of the Roman period it was abandoned and a new settlement was built on the adjacent hill-top, today crowned by a magnificent cathedral founded in the 11th century by St Bertrand. But when precisely was the lower town abandoned? And when were the fortifications built around the hill-top town? This has been a subject of joint excavations both by the French team down in the plain and by a British team up on the hilltop.

Since some trenching by the veteran excavator, Bernard Sapène in the ‘sixties, right at the end of his career, it had been recognised that the walls were late Roman in origin, if much rebuilt in the Middle Ages, but they remained unstudied and undated. One of the major research themes of the Projet Collectif was the transition from the classical-style town on the valley floor to the late antique and medieval town on the hill-top, and clearly the walls and what lay within them were a key to this. Moreover, the walls were about to be classed as a ‘Monument Historique’, therefore a better database and understanding were essential for this monument, almost a kilometre long and enclosing some 4.5 ha (11 acres). Mick and Jason proposed a British project on the walls and this was kindly accepted by the Projet Collectif and the regional Archaeology Service for Midi- Pyrénées, who oversaw the work at Saint- Bertrand and provided some finance. Simon Esmonde Cleary, from Birmingham University, who was also interested in the Roman to Medieval transition, joined the team in 1994, using Saint-Bertrand for field-training for his university students, thus guaranteeing a continuity in labour-force and funding. From 1994 to 2000 excavation and survey and analysis of the standing remains proceeded hand-in-hand, the latter being the responsibility of Jason Wood who finished this work in 2001.

We soon established that substantial elements of the late Roman walls were still visible: they generally lacked their facing stones, but the core of the walls still survived. Moreover, unlike the medieval builders, the Roman builders followed the slopes of the hill-top rather than trying to lay their courses horizontally. The sloping build and the style of masonry made the Roman work easily recognisable. Normally the foundations were laid into a trench cut into the hill-side, then there was a substructure, above which rose the wall proper in limestone, faced in small block-work with regular brick and tile courses, all covered with a mortar render finished off with a white limewash coating, perhaps intended to give a marble-like appearance. Though the walls lacked the foundations of reused architectural blocks so characteristic of many late urban defences in Gaul, there was a lot of broken-up stonework incorporated in the construction, including fragments of cornices, columns and capitals; and at least ten drains ran through the walls to evacuate the water of Pyrenean storms.

The most spectacular and unexpected find was at the south-western angle of the circuit where under a medieval heightening of the wall, part of the Roman wall-top survived almost to full height. It consisted of a wall-walk fronted by a crenellated parapet. The left-hand ends of the merlons (that is the sticking-up bits of the battlements) were strengthened by traverses, internal buttresses. This is the only such walltop to have survived in situ in France, though there are traces at Carcassonne and a similar system has also recently been identified on the collapsed walls at Saint-Lézer, not far from Saint- Bertrand. It is hoped this section of the walls will be consolidated and displayed. The analyses also located one tower and suggested the position of nine others on the north-eastern face of the circuit, overlooking the lower town.

The walls were clearly designed to be defensive, perched atop the steep-sided hill and difficult of access. But they clearly also had a monumental character, for by this date walls were the defining monument of towns of any pretension. At Saint- Bertrand they were highly visible across the valley of the Garonne, particularly when new and gleaming white, with their towers overlooking what was left of the lower town.

We dug a series of small trenches at various points along the circuit, principally to try to obtain dating evidence but also to cast some light on the occupation of the hill-top; in both of these we were successful. Excavation of stretches of the foundation-trenches produced pottery and glass dating to the early 5th century, rather later than most town walls in Gaul. But this date coincides well with the evidence for the demolition and clearance of much of the centre of the lower town, and given the presence of architectural fragments which can be shown to come from the buildings of the lower town, it suggests that, in fact, the ancient monumental centre was the quarry for the new monument on the hill-top.

However the Roman city was not entirely abandoned, as the remains of no less than three churches demonstrate. The earliest and largest church is the Christian Basilica uncovered spasmodically between 1913 and 1926, but completely re-excavated from 1985-1992, and lying in the south-east quarter of the town, just under the citadel. This was originally built in the early 5th century, apparently carved out of a very large domus, or private house. It was several times enlarged as the house fell into ruin, and the church came to be used for burials until it finally fell into ruin in the high Middle Ages. Adjacent to it the small Romanesque chapel of Saint-Julian still survives, surrounded by its cemetery. A third early church still survives half a mile to the east of the town at Saint-Just de Valcabrère: was this originally a martyr’s church, set over a Roman cemetery? Clearly, although the centre of the town was ransacked, the rest of the town still remained the Christian religious centre: the new hill-top town was essentially for defensive purposes.

The hill-top excavations also produced a surprise about the early history of the site: there were no traces of Iron Age occupation, quashing the idea of a pre-Roman oppidum on the hill. In fact there was no trace of occupation before the later 4th century. But soon after the walls were constructed, and once they were in place, the hill-top seems to have taken over as the main focus of occupation. Evidence for occupation dating from the 5th century to probably some time in the 8th was recovered, along with pottery and glass – and no evidence of the siege of 585. The pottery and glass are in themselves interesting, for they suggest a still-active trade with the wider world. Was this perhaps linked to commerce in marble? The distinctive ‘Aquitanian’ sarcophagi, made from the local marble, are a well-known feature of early- Medieval south-western France. Thereafter the archaeology, like the history, enters a ‘dark age’.

Activity revives in the 11th century, when at the time of the Gregorian reforms, Bertrand de l’Isle Jourdain – later to be St Bertrand after whom the town was to be named – was nominated as Bishop of Comminges, and began the construction of the cathedral. In the Middle Ages the town flourished, as it was a favourite stopping point on the pilgrims route to Santiago de Compostela. The fine cloister and nave were built in the 11th and 12th centuries, and the superb chancel was added in the 14th century; perhaps finest of all, the choir stalls and the magnificent organ date from the 16th century. However, in the French Revolution the bishopric was suppressed, leading to the economic decline of the village. Today, the population is down to under a thousand, but many of the old buildings still survive making it a jewel among French villages. The ghost-writer M. R. James set the first of his Ghost Stories of an Antiquary ‘Canon Alberic’s Scrap-book’, in Saint- Bertrand (available for free download on the web, courtesy of the Gutenberg project). For archaeologists visiting south-west France it is well worth a detour: a well laid out Roman town, a magnificent cathedral, a charming village with meandering streets, literary associations – and a welcoming hostillerie: what more can you desire?