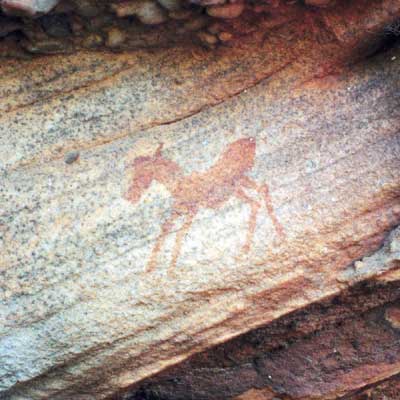 ‘When we die
A soft wind will blow away our
footprints in the sand.
When the wind has gone,
Who will tell the timelessness
That once we walked this way
in the dawn of time’

San or Bushman?
‘Bushmen’, or ‘Boesman’ in Africaans, was the word used by European settlers for the hunter-gatherer people of the Kalahari Desert and elsewhere in Southern Africa. ‘Hottentot’, likewise, was the word for pastoralist herders who, it seemed, were later arrivals replacing the Bushmen and causing them to retreat into remoter desert and mountain regions.
Both terms more recently have been regarded as pejorative, and alternative words have become preferred, derived from what many of these people called themselves. So ‘San’ is now the commonly accepted word for Bushmen, and Khoekhoen similarly for Hottentot. More recent thinking prefers to see the newcomers merging happily with the San to form the Khoesan.
Ironically, ‘San’ is a Nama word for Bushmen meaning something like ‘cattle-less wanderer’ or ‘vagabond’, which is scarcely less pejorative, while some San people in Namibia and Botswana themselves prefer to be called Bushmen. There is no pleasing everybody.

Practise your clicks
(with help from David Lewis-Williams)
In the San language, tongue clicks are an essential element in the pronunciation of words. There are four basic types of click:
Dental click (indicated by /). The tip of the tongue is placed against the back of the upper front teeth. In the release, it is pulled away with a sound similar to the one that English-speakers use as a gentle reproof.
Alveolar-palatal click (indicated by !). The tip of the tongue is pressed firmly against the back of the alveolar ridge where it meets the hard palate and is very sharply snapped down on release. A loud pop results.
Alveolar click (indicated by #). The front part of the tongue, more than the tip, is pressed against the alveolar ridge and drawn sharply downward when released.
Lateral click (indicated by //). The tongue is placed as for the alveolar click. It is released at the sides by being drawn in from the teeth. Drivers of horses sometimes use lateral clicks to signal their horses to start or go faster.
If you can’t pronounce these clicks, substitute a ‘k’, or, where there is an adjacent consonant, omit them altogether.