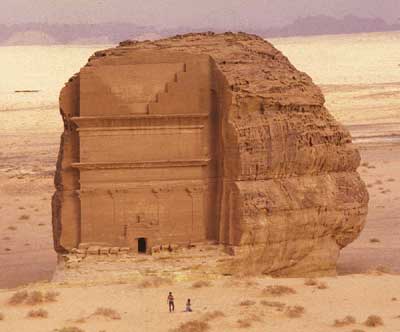 I first visited Saudi Arabia in the mid 1960s when King Faisal bin Abdul Aziz Al-Saud had just taken up his leadership of the Kingdom. King Faisal was a man of great vision and deep humanity. He sought knowledge and education for his people and declared that no country that disregarded its history could expect to be taken seriously.

At the time of his accession very little was known about the country’s pre-Islamic past. This was partly because anything before the dawn of Islam in the 7th century AD was regarded as ‘The Age of Ignorance’ and thus best ignored. King Faisal rejected this policy but was always careful to do nothing that might offend as he set his country on a path to rediscover its past.

The king brought on board a young and dynamic Saudi Arabian scholar Abdullah Hassan Masry. Masry was asked to create a new and improved Department of Antiquities for the Kingdom to be located in the capital city of Riyadh. Masry attracted teams of scholars from home and abroad and with them we set about assembling an historical profile for the Kingdom in antiquity. The highlights of the survey were to be incorporated in a new Museum of Archaeology and Ethnography, the creation of which we were asked to design and manage,under the Department’s overall direction.

To map Saudi’s history, Masry set up a general archaeological survey of the Kingdom – an immense and complex task. The multinational teams set out across the immensity of Saudi Arabia to survey, map, photograph, collect diagnostic surface materials and identify archaeological sites. Supported by all manner of specialists they went to every corner of the Kingdom to record all the important sites standing above ground. Twelve years later they had recorded several tens of thousands of sites. Their results were eagerly published year on year in the Department’s journal: Atlal, The Journal of Saudi Arabian Archaeology. Their work generated a flood of objects for eventual inclusion in the museum.

The new museum presented to the public – for the first time – a long-term historical profile for Saudi Arabia. The material spanned the early occupation of Saudi Arabia by the ancestors of modern humans, around three quarters of a million years ago, down to pre-modern times.

Artefacts and specially commissioned photos from the survey – including many images of the wonderful pecked and engraved rock art from the western region – filled the museum.

Among the ancient artefacts on show, a highlight was the Ubaid material – such as a finely decorated beaker and a wide range of diagnostic sherds, many from Masry’s own surveys in the Eastern Region bordering the Arabian Gulf. The Ubaid people came from southern Iraq, and the Saudi Ubaid material provided early evidence that they maintained wide-ranging trading network. It is likely that they were exchanging their goods for local products, such as the Gulf’s renowned pearls.

Their presence in Arabia created a splash since the Ubaid people are extremely important to the ancient world history of the Near East. They were forerunners of the complex societies that later emerged in the region. Their increasingly socially stratified culture persisted from around 5300 – 4100 BC. Judging by its archaeology, the Gulf was clearly an important seaway for the earliest Western Asiatic civilisations of Mesopotamia and Susiana – and later the Babylonians, Akkadians and Assyrians, eventually reaching as far as the Indus Valley in modern Pakistan to the east and the Mediterranean in the west.

Another major work of art from the antiquity of Saudi Arabia found its home in the Museum. This was a magnificent bronze head of a lioness from Najran, in the southwest of the Kingdom. I was pleased to be able to secure the return of this splendid artefact from the British Museum, where it had been held since its discovery in the 1930s.

Mad’ain Saleh is a remote and altogether strange place, distinctly eerie, despite the powerful Arabian sun that pours down on it, for Mad’ain Saleh is known as a place accursed. According to the Holy Qur’an the Prophet Saleh, one of the forerunners of the Prophet Mohammed, placed an anathema upon it when its inhabitants, despite his commands, killed a miraculous she-camel that emerged from the sheer rock face at his behest. The rock from which the she-camel appeared is still pointed out to travellers to this day.

The site is a titanic graveyard. Strewn across the floor of this immense enclosed space are 131 tombs scattered over an area of about 12 square kilometres (about the size of an English county). The area is littered with huge boulders, the product of some remote, tremendous geological cataclysm of distant time. Most boulders stand independently, some are linked by rocky outcrops, all in the same rose-red stone known from Petra. Suddenly to the visitor it will become clear that many of these great rocks have been sculpted into tombs by the hand of man, the Nabataeans, a people contemporary with the Romans and ancestral to the Arabs.

But why were they in Saudi Arabia when their most famous surviving monument is Petra in Jordan, further to the north? The reason is that Hijr, to use its ancient name, straddled the northern route up which incense was exported to the Mediterranean from the spice kingdoms, notably Yemen, in Southern Arabia. For a time the Nabataeans traded with Rome as equals until the Empire decided that it should have an untrammelled access to the spice routes and destroyed the Nabataean kingdom in 106 AD,absorbing it into Arabia Petraea.

There was also a very pretty little Mamluke guard fort or miniature castle on the site, built during the 16th century, to protect the pilgrim route. This too had fallen into chronic disrepair and was scheduled to be restored. The work was admirably supervised by our friend and scholar, the late Dr Brian Doe, who had worked with us on the re-excavation of the Barbar temple site on the Gulf island of Bahrain.

Outside the perimeter of Mad’ain Saleh itself were two other major sites: one of these was the city of Dedan, possibly an 8th century BC foundation, now hidden deep beneath its own debris, and a group of rock tombs high on the cliffs above the city, several of them surmounted by carvings of seated lions . These dated from the 12th century BC.

Looking back on our time in Saudi Arabia, my colleagues and I have recognised that we were greatly privileged to have participated in the recovery of the early history of one of the most important regions of the world. Very little was known about the early history of Arabia. Even the latest edition of the Cambridge Ancient History, in its hey-day the most authoritative review of the historic past published in the English language, only had brief mentions of the Arabian Peninsula in its volume devoted to The Early History of the Middle East. Perhaps this absence of comment is not so surprising when we reflect that the official Saudi website itself declares that the history of the Kingdom began in 622 AD with the Revelation of Islam. Similarly, the National Museum is said to have now moved exhibits relating to its pre- Islamic past into relative obscurity.

Yet, as we have seen, the Kingdom has an ancient and fascinating past that stretches far back into time. It should be a source of pride to Saudi Arabia and of deep interest to us all. The late great King Faisal bin Abdul Aziz would, I am quite sure, have endorsed this view.