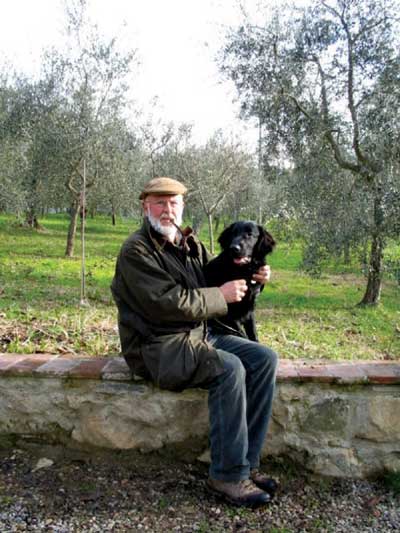 Riccardo Francovich has been a leading exponent of Medieval Archaeology in Italy for more than thirty years, writes Richard Hodges. His excavations and research in Tuscany make it by far and away the best-studied region of its kind in Europe. But when you walk through the olive groves behind his Florentine house, his young setter racing off after the scent of wild boar, it is not Medieval Archaeology that galvanizes Riccardo in conversation. It is the state of archaeology today.

I have known Riccardo for twenty-five years, and he more than anyone else has influenced how I approached the tricky problem of making a park and researching Butrint in Albania. Good research leads to good cultural heritage is his mantra. As we wound our way on a walk through the olive groves, however, I first tried to piece together how Riccardo became this towering figure in Italian archaeology.

I quizzed him on how he got his post, knowing how hard it was to break into the university system in those years. Siena University then housed a small department of classical archaeologists led by the energetic Andrea Carandini who happened to be digging alongside the British on the Unesco excavations at Carthage.

Looking back over these thirty years, there are clear steps along the way. First, he set out to understand how to excavate well and on a big scale, introducing many British methods to his field practice. Next, he learnt the hard way how to make archaeological parks, some, like Montarrenti (where I was the co-director) not taking off, while others like Rocca San Silvestro became such an enormous success as a deserted mining village in a Maremma landscape that Riccardo was rudely bounced off the management board. These lessons have informed his skill in recent times as he has developed new teaching centres associated with his archaeological excavations at Grosseto and Poggibonsi. These experiences also honed his interest in landscape architecture, how to manage sites with local communities, and how to present sites for the public often using the celebrated reconstruction paintings of Studio Inklink at Florence.

These numerous excavations, amply published in either Archeologia Medievale (which is in its 32nd year and which he still edits) or one of his monograph series, have given rise to a thread of research issues. In the early 80s he was fascinated by incastellamento, the rise of hilltop villages and towns which form such a characteristic feature of Italy. This was followed by a massive project on Medieval metal extraction in western Tuscany, involving archaeologists from France, Germany and Spain. More recently, he has been elaborating his thesis on the transition from Roman villas to villages in the 6th and 7th centuries, vigorously challenging historical dogmas. Now he is throwing himself into a new challenge: Florence. A European city par excellence, Florence boasts numerous excavations but almost none that have been adequately published. With his famed ability at raising funds, he has been able to create a team to make good the problems left by the Soprintendenza over the past 25 years and herein lies the nub of Riccardo’s current thinking.

Interviewed last summer by the Italian magazine, Archeologia Viva, Riccardo roundly criticized the Soprintendenza’s approach to excavating the Piazza della Signorie in the heart of the city. After a huge dig in the 80s, almost nothing was published and, what’s more, the finds were inaccessible. A key site for understanding the early history of this city was all but lost. The Soprintendente in question responded, metaphorically digging a hole for himself and the lassitude of his service. The debate then encouraged Riccardo to take on Salvatore Settis, head of the celebrated Scuola Normale at Pisa and former Director of the Getty Research Centre. Settis, many believe, has his sights on being Minister of Culture if Silvio Belusconi looses the up-coming elections to the Centre- Left alliance, and has been publishing his thoughts everywhere. Riccardo, exercised by the experience in Florence, challenged him to an academic dual in Andrea Carandini’s new journal, Workshop per Archeologia Classica.

The polarised views sum up much of Italy’s current problems as a nation. So what is Riccardo’s vision?

In effect, he sees a limited future for the state in running Italy’s patrimony. Instead, perhaps influenced by his familiarity with Britain, he believes that local government cares more about delivering research and science to communities. The state, he adds, should be responsible for national museums, but not for those sites and museums it simply has neither the knowledge nor the will to conserve and protect. More importantly, the state should stay out of running digs. These should be run by units and cooperatives who answer to local communities if the results are adequately explained to them.

His certainty, of course, is based upon his experience. Dozens of Tuscan communities have backed his projects and as result have been rewarded not only with newly conserved sites but trails, information panels and, an everconstant cycle of exhibitions and publications (monographs; site guides and pamphlets; hiking guides etc.). More to the point, his excavations not only bring visitors but also dignify places. Now backed by the powerful Fondazione Monte dei Paschi, part of Tuscany’s oldest bank, Riccardo has enlarged his operations, but always matching the bank’s ample resources, which he invests in personnel (studentships and fellowships), with resources provided by local communities.

As we near the end of this walk, with Riccardo in full flow, I ask him which sites thrilled him the most. Without pausing he speaks of Rocca San Silvestro, a deserted medieval village that, I recalled for him, had stunned Maurice Beresford and John Hurst (the makers of Wharram Percy and the desertedmedieval- village culture in Europe) when I brought them there in 1992. Occupying its high peak in the rough, barren lands overlooking the western coast of Tuscany, it is a place that retains the spirit of the Middle Ages. Today, with its museum, café and many trails, it is one of the constellation of parks invented by Riccardo in the lesser known hills of western Tuscany. He pauses then and reflects that finding the crypt of Siena cathedral with its frescoes by ‘Pre-Duccio’ was no less special.

Riccardo Francovich is much more than the sum of these different achievements and modernizing values. This effervescent figure with his white beard has a youthful mind that nearing sixty makes him terrific company. You cannot imagine him retiring, any more than you might imagine a walk with him in silence. He is fascinated by the way his own views of the Middle Ages have altered with the ever-growing number of projects under his belt. He feels challenged by how little he understands the mezzadrial farming culture of the early Renaissance. And, in a country where access to information is so problematical (witness the problem with the Soprintendenza digs in Florence), he is thrilled by the new developments in making archaeological archives and the increasingly inventive methods for predicting where sites are and how, without excavation, these might be reconstructed using new electronic tools. As much as anything, the pleasure of his company is his breathless sense of enquiry coupled with a humanism worthy of a Renaissance scholar.

Ulpiana: The Romans in Kosovo