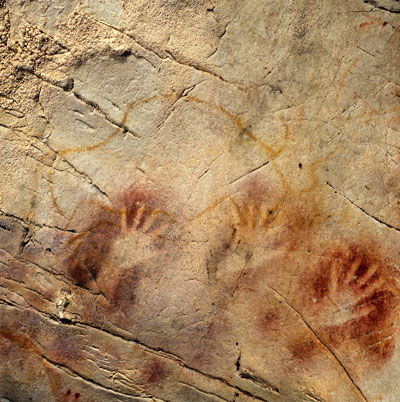 Cave art is one of the most recognisable features of the European Upper Palaeolithic. We know that it spanned at least 20,000 years, almost the entirety of the Upper Palaeolithic, but we still have only a rudimentary understanding of how it evolved. Now, by applying a method using uranium-series dating, a technique not previously used in this context, we are able to show that the earliest examples are older still: they belong to a period when the dwindling Neanderthal population overlapped with our own species, Homo sapiens, as it began to colonise Europe.

Early attempts to trace the development of cave art were based on supposed evolutionary schemes from simple to sophisticated. These sometimes relied on superimposition of different motifs, but more often resorted to informed guesswork. With figurative art, archaeology suggests we are dealing with a much later emergence – perhaps not in Africa but in Australia and Europe.

Art demonstrates a capacity for abstract thought; it is a human creation and sets us apart from the rest of the animal kingdom. This visual expression of a wider symbolic world includes language and the means for storing and communicating information. We know that our symbolic capacity evolved alongside our gracile modern bodies in our African homeland. Engraved lines on ochre crayons from Blombos Cave in South Africa show that the use of coloured pigments and engraved motifs appeared at least 100,000 years ago. Similarly, shells used for jewellery have been found in deposits of similar age in the extreme north and south of the continent.

Furthermore, such applications of direct dating remain rare, which may explain why surprising results can be obtained that appear to overturn what we think we understand about the earliest development of art.

One example of this is the spectacular charcoal drawings of the Grotte Chauvet in south-eastern France. These look, stylistically, like they belong to the Late Upper Palaeolithic, about 15,000 years ago. However, a handful of radiocarbon measurements suggest an age of more than double that. As the art is so sophisticated, if this is correct it throws out of the window any notion of artistic development over the entirety of the Upper Palaeolithic.

However, by using the uranium-series dating method, we were able to improve our understanding of the chronology of Upper Palaeolithic cave art in northern Spain.

In our study, recently published in Science, we obtained 50 dates on calcites overlying art in 11 caves in Cantabria and Asturias. The most exciting results came from the caves of Altamira, Tito Bustillo, and El Castillo.

Altamira is one of the best-known cave-art sites in the world because of the stunning painted bison and deer of its polychrome ceiling. It was recognised early on that these animals were sometimes superimposed on earlier, simpler red symbols, and it was therefore clear that several phases of painting could be identified in the cave. However, it was unclear if these span a relatively short period of time corresponding to the cave’s known archaeology (culturally Late Upper Palaeolithic Solutrean and Magdalenian c.25,000-16,000 years ago), or whether these were done at very isolated times over a much longer timespan.

Some results could be read either way: one date indicated that a red horse outline on the ceiling was older than 22,000 years, for example, but other results clearly demonstrated a surprisingly old age for some of the art. In particular, one large red symbol was created earlier than 35,600 years ago, placing it at least in the Early Upper Palaeolithic (Aurignacian) period and immediately confirming a long chronology for the paintings.

The presence of Aurignacian cave art in northern Spain had been suggested as a possibility as early as the 1930s by that doyen of cave-art studies the Abbe Henri Breuil, but this was the first conclusive evidence for cave art of this age in Spain. Our results also indicated a similarly long chronology for the art in Tito Bustillo cave in Asturias.

Here, the main artistic panels feature 3m-long horses which had previously been radiocarbon dated to the Magdalenian period around 19,000-16,000 years ago, but which had been painted over a spread of red pigment that clearly represents an earlier phase of painting.