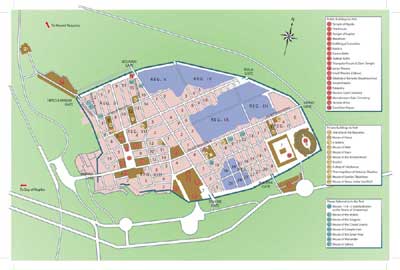 Our plan is designed to help you find your way around Pompeii. We have included the traditional division of the city into regions (regiones) and city-blocks (insulae). Thus, for example, the House of Amarantus excavated by Reading University is Houses 11 and 12, Insula 9, Region I (30 on the plan). All houses in the ancient city can therefore be identified by number. Many also have popular names. (Note that the blue areas are as yet unexcavated.)
We have also provided our own numbered sequence of buildings within the city, divided into public buildings to visit (marked red), private buildings to visit (yellow), and places referred to in the text (turquoise). The areas shaded brown indicate the precise locations of places to visit. So the plan is both for use on site and for locating the places discussed in our articles.
Are you visiting Pompeii for the first time? Do you want some basic advice on getting the most out of your visit? If so, read on.
Go for at least one full day if you can. The site is huge and tiring to explore, so make sure you are well equipped (good walking shoes, bottled water, protection against the sun, etc), and pace yourself, taking breaks as needed (there is an excellent self-service cafeteria adjacent to the Forum Baths). Take care moving about: many surfaces are very uneven and it is easy to misjudge your footing. Be prepared, also, for some disappointment: many buildings are always closed, and though those listed here for visiting are usually open (or can be viewed well enough from outside), there will be periodic exceptions.

What should you see?
We have listed the main sites, but we can narrow this down to four key areas for thorough exploration. First, the Forum, the Basilica, the Temple of Apollo, the Temple of Jupiter, the Macellum and the Building of Eumachia form one group. The Forum is the key public open space and the public buildings around it play key roles in the life of the city – the Forum area is the centre of government, justice, religion and commerce within the city.
Second come the Triangular Forum and Doric Temple, the Large Theatre, the Small Theatre, the Gladiators’ Barracks, and the Temple of Isis – a kind of leisure complex, but with the difference, as always in the ancient world, that events here would have had a strong religious element too.
Thirdly, a walk down the Via dell’Abbondanza, taking in some of the attractions in the side-streets along the way is recommended. You should see the Brothel, the Stabian Baths, the Fullery of Stephanus, the Thermopolium of Vetutius Placidus, the House of Loreius Tiburtinus, and the House of Venus in the Sea Shell, ending up with the Palaestra, the Amphitheatre, and the Nuceria Gate Cemetery. Note that you will pass the House of Amarantus and the House of the Chaste Lovers on the way.
Finally, there is the northern part of town, taking in the House of the Ancient Hunt, the House of the Vettii, the House of the Faun, the Forum Baths, the House of Pansa, and the Bakery, before heading down the Via Consolare (past the House of the Vestals and the House of the Surgeon) to the Herculaneum Gate Cemetery. Many visitors miss the Villa of the Mysteries, but it is worth the walk beyond the Herculaneum Gate to reach this palatial extramural complex with its unique frescoes. Also in the north, another site generally missed is the Castellum Aquae, the city water-works, and the line of water-towers down the main street linking the Vesuvius and Stabiae Gates. It has now been made famous by Robert Harris’s novel (see ‘Books’).