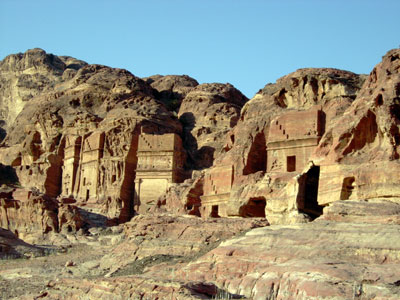 Strabo, in his opus Geography, writes dismissively that the Nabataeans ‘consider dead bodies as they do dung, just as Heraclitus says: “Corpses are more suited to be thrown out than dung.” And therefore they bury even their kings by dung-heaps.’ Scholars have puzzled over these words for decades, as the sheer splendour of their tombs, not to mention the time and money obviously invested in their creation, contradicts this assessment.

The ancient geographer is our sole historical source on Nabataean burial customs, and even this is second hand – his knowledge comes from the observations of the philosopher Athenodorus, who lived for a while in Petra during the 1st century BC. Perhaps Strabo was referring to a ritual exposure of the dead. Maybe the original meaning of the text has been misinterpreted over time. Or, could it be that his source was unreliable? What the contradiction does highlight is that there are considerable gaps in our knowledge of Nabataean funerary practices.

We are excavating two monumental façade tombs at the base of al-Khubthah Mountain, in the area of the so-called ‘Royal Tombs’. The International al-Khubthah Tombs Project (IKTP), initiated in 2010, has discovered partially looted burials in these tombs, providing crucial information on burial procedures, which are consistent with those observed in the few other excavated tombs at Petra.

Rather than a disrespectful treatment of the dead as described by Strabo, the Nabataeans appear to have placed much importance on housing, protecting, and commemorating the deceased. Furthermore, the boundaries between the world of the living and the world of the dead seem to have been surprisingly fluid.

Designed to impress
Petra has more than a thousand tombs carved in its rocky terrain. The most impressive of these are the 600 or so façade tombs that enliven the mountains surrounding the city centre. These tombs, carved by the Nabataeans between the 1st century BC and the 2nd century AD, served a dual function: they provided a safe and ‘eternal’ place of burial, while the decorated façade commemorated the individuals and families buried within.

These façades, with their blend of local, Egyptian, Greek, and Mesopotamian architectural decoration, are a reflection of the prosperity, craftsmanship, and cultural exchange of the Nabataeans, who became wealthy through their involvement in long-distance trade.

Over the centuries, the tombs at Petra have been looted and reused for a variety of purposes, such as domestic dwellings, storage, and shelter for animals. The so-called ‘Urn Tomb’ was even converted into a church in the 4th century AD. This means we have lost much of the evidence, such as human remains, grave goods, and inscriptions, which otherwise would have informed us about burial procedures, rituals in service of the dead, the profiles of the deceased, and the period in which each tomb was in use.

We are examining and documenting the interiors of the tombs and the area outside the façades because, while moveable objects may have gone, the rock-cut installations for the tombs’ incumbents and the rituals surrounding their burial remain. These enable us to reconstruct the practices and funerary rites that took place in and immediately outside the tombs, and shed light on this important aspect of Nabataean society. Furthermore, spatial analyses reveal how the Nabataeans conceptualised funerary space, as well as the role the tombs played in the daily life of the inhabitants of Petra.

Petra’s dramatic landscape of ‘rose-red’ rocky mountains has captured the imagination of poets, artists, scholars, and sightseers since its rediscovery by the Swiss explorer Johann Ludwig Burckhardt in 1812. The hundreds of façade tombs that are carved into the cliff-faces of these mountains are mostly in prominent locations – overlooking the urban centre or lining the valleys that provide an entrance to the ancient city.

A tomb with a view
The Nabataeans took the local topography into account when choosing where to carve out their tombs, the accessibility and quality of the sandstone being important considerations. Thus, the tombs form several cemeteries that may have served different parts of the city – rather than being organised into a single necropolis that is separate from residential areas.

As the city expanded and contracted over the centuries, domestic space often encroached upon the funerary areas, as we see on the western slopes of al-Khubthah and the eastern slopes of Jabal al-Madhbah. However, this does
not seem to have worried the Nabataeans, indeed the Main Theatre was carved into an existing cemetery.

The decoration and monumentality of the façade tombs displayed the social status and cultural identity of those who owned them. Although we have very few surviving inscriptions accompanying the tombs at Petra, a third of the Nabataean façade tombs at Madā’in Ṣāliḣ (Egra in ancient times) have formal inscriptions on their façades.

Madā’in Ṣāliḣ is the southernmost outpost of Nabataean territory (now situated in modern Saudi Arabia). It is the only other major site where Nabataean façade tombs are found, and therefore the information found in the funerary inscriptions there is crucial to our understanding of the tombs. They reveal that the tombs were owned by individuals of high status, and were intended for the burials of their families.

The most common motif on the façades is the crowstep (stepped crenellation). This pattern appears to have originated in Assyrian art, and was also used in Achaemenid and Persian art. However, its popularity spread throughout the Hellenistic East, and so is of little help in determining the disputed origins of the Nabataeans.

The significance of the crowstep for the Nabataeans is difficult to determine, but it is telling that around 14 % of the tombs at Petra lack this motif. Instead, they have decorative elements inspired by Classical architecture. Perhaps the owners of these tombs wanted to show off their Greco-Roman cultural leanings – a common tendency among the local elite of urban centres in the Greco-Roman Near East.

The most famous among the Classical tombs is the Khazneh (the Treasury), located in a dramatic position at the end of the Siq, the spectacular gorge that provides an entrance to the city from the east. This tomb, which most likely belonged to the Nabataean king Aretas IV, even incorporates figures from Classical mythology, such as the divine guardians Castor and Pollux, and the fearsome Amazons.

Excavations beneath the courtyard of the Khazneh by the Department of Antiquities of the Hashemite Kingdom of Jordan revealed that this magnificent tomb was, in fact, carved above a row of pre-existing tombs, possibly belonging to generations of the same family.

In addition to the conspicuous carved decoration, there is evidence that the façade tombs were once plastered and painted, creating a truly dramatic impact – rather than the natural hues of the sandstone we see today. The structures originally built in front of many of the façades, such as colonnades and gateways, were intended to give the tombs a three-dimensional appearance, which is barely noticeable today.

Until recently, areas of study mainly focused on the façades of the tombs. Now, several projects are investigating the external property belonging to the tombs, in particular the large tomb complexes and the sources of influence on their architectural layout. This, however, is the first detailed documentation and study of the interiors of the tombs.