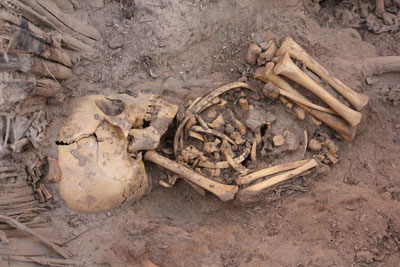 Exploring a Peruvian chamber of secrets

Why were the bodies of a dozen newborn babies carefully placed around the edge of a 1,000-year-old tomb? Is this evidence of a society’s grim tribute to its dead? Peter Eeckhout and Lawrence Owens tell CWA about their unique discovery at the monumental pre-Columbian site of Pachacamac in Peru.

The sprawling sanctuary at Pachacamac, dedicated to a deity of the same name, was once one of the largest and most important religious centres in the Andean world, housing an oracle visited by pre-Columbian pilgrims from across the region.

Overlooking the Pacific Coast about 18 miles (30km) south of modern Lima, it was founded during Peru’s Early Intermediate Period (c.200 BC-AD 650), and flourished under the rule of both the Wari Empire and the Incas, who added to the complex with buildings dedicated to their own sun god. By the time Pizarro’s Conquistadors arrived in 1533, Pachacamac’s temples and stepped pyramids covered 600ha. Yet, within just a few years of Spanish conquest, it had been completely abandoned.

The city was first excavated by German archaeologist Max Uhle in the late 19th century; but since 1999, the Ychsma Project has been led by Professor Peter Eeckhout of the Université Libre in Brussels. This season, while investigating a cemetery first noted in 2004, the team made a surprise discovery of a huge tomb – ten times larger than any previously uncovered, and dating to the Ychsma culture of the Late Intermediate Period (c.AD 1000-1470).

‘We knew that the area contained burials, but previous finds had been modest,’ said Lawrence Owens, a University of London bioarchaeologist who is leading the project’s anthropological research. ‘This tomb is utterly unique.’

The 20m²-oval chamber (c.215ft²) had been dug directly in front of one of the site’s temples, and was covered with shaped logs supporting a thatched roof of reeds. The dead were buried in a flexed position, and surrounded by grave goods that included pots, dogs, and guinea pigs.

A number of the mummy bundles were topped with painted wooden masks, and some were also adorned with jewellery, which suggests they enjoyed a higher status in the community. Most of the ornaments were woven from textiles or made from pierced nuts, seeds, and shells.

One male had copper-alloy anklets and bracelets as well as about 25 objects – considerably more than the usual two or three associated with most burials on the site – suggesting greater wealth than his neighbours. Others had been decorated with tiny pieces of metal, often carefully placed on the body including inside the mouth.

Owens explains: ‘Metal was such a rare commodity that anything made from it would have had great social significance.’ We know that by the end of the 15th century, following the arrival of the Spanish, only Inca royalty were entitled to wear gold, while nobles and priests were allowed silver. The rest of the population – if they could afford it – used copper. It seems likely that such traditions had deep roots, possibly extending back to this earlier Ychsma period.

Poignant parcels
Around the perimeter of the tomb, archaeologists uncovered rather more poignant objects accompanying the burial: the remains of a dozen newborn babies, carefully arranged with their heads pointing towards the main chamber. It could be that these, too, were intended as offerings to the dead.

But the evidence does not necessarily indicate child-sacrifice, as Owens explains: ‘We suspect that the remains of infants may have been saved to be buried when adults died, as rather grisly grave goods. Previously, we have seen individual burials with up to ten babies piled over the deceased’s head. This tomb, though, is larger, and had them strewn all around the edge, yet seemingly positioned so that they were looking into the tomb. It must have been a strange-looking structure with bodies piled all around it.’

While the grave goods found in the newly discovered tomb suggest that its occupants were not particularly wealthy, the site of the burial in front of a temple certainly would have been a desirable location. As such, it faced a part of the site the archaeologists refer to as the ‘Sacred Precinct’, home to the most important buildings in Pachacamac and thus, from a spiritual point of view, the whole Andean area.

‘One can imagine the draw of being buried right by your oracular god – think of it in terms of important people being buried near the altar in a church,’ says Owens.

The precinct may well have contained richer burials, but, thanks to looters, we may never know. Heavily gilded, it was too great a temptation for the Spaniards who ransacked the site. In fact, the Conquistadors, faced with so much gold but lacking iron, even used it to shoe their horses.

Amid this destruction, the discovery of an undisturbed tomb offers great potential for furthering our understanding of the site. These latest findings have raised questions that the researchers had never had to address before: ‘Our understanding of the chronological sequence at Pachacamac is still fragmentary, especially for the time period which produced this tomb, and the artefacts we have recovered from the burial will be a considerable help to us in these matters,’ Peter Eeckhout said. ‘Fitting this discovery into the sequence of other tombs in the area will help us understand the transitions marked in this important cemetery, which in turn reflect the social changes
at the end of the Late Intermediate Period and give a human dimension to the drastic architectural changes that are seen at this time.’

Preliminary examination has shown that a large number of individuals share an uncommon genetic trait in their spine, and one of the main areas of research will be to see if there are any familial links between the tomb’s occupants. Owens has examined more than 200 burials from the whole site, but this particular group exhibits the highest level of this particular trait. He believes, therefore, that it may be a family vault – although tests are yet to be made to check this hypothesis.