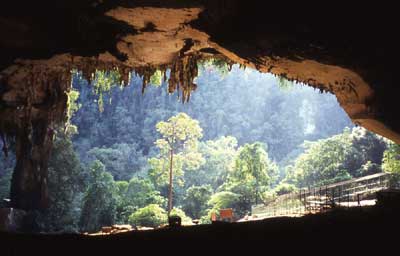 On 7 February 1958, the diggers in ‘Hell Trench’ at the West Mouth of the Niah Cave found a human skull. They were working on the edge of a huge underground complex whose central chamber was the size of a cathedral. It was well known to local hunter-gatherers as place to collect bat guano to sell as fertiliser and swifts’ nests to supply the Chinese market for birds’ nest soup. It had now become the site of a major dig organised by Tom Harrisson and his wife Barbara. And ‘Hell Trench’ – so called because of the heat and humidity, especially in the afternoon when the sun shone directly overhead – had just yielded a find that was to rock the archaeological establishment.
At the time, the oldest dated example of a fully modern human was the 33,000 year-old Cro-Magnon Man. This fossil was the basis of two key ideas about human evolution: first, that Homo sapiens had evolved in Europe; and second, that the fully developed species (sometimes called Homo sapiens sapiens) was directly descended from Neanderthals. But the ‘Deep Skull’ from Niah – that of a 15-17 year-old ‘gracile’ (or light-boned) adolescent, probably a girl, and most definitely a fully modern human – had been found in sediments containing charcoal with a radiocarbon date of c. 40,000 BC. Not only was this older than the Cro-Magnon skull; it was older than some Neanderthal specimens. It looked as if there were modern humans in Southeast Asia when Europe was still populated by Neanderthals.
There were doubters. Tom and Barbara Harrisson were skilled amateurs, not professionals, and Tom had a reputation for deviousness. Could the evidence be trusted? Specifically, how reliable was the claimed relationship between the charcoal and the skull? Some even suspected that the skull had been planted. Others were concerned that the Harrissons did not dig stratigraphically – layer by layer. Their method was to remove uniform horizontal spits – 6 inches at a time in sterile deposits, 2 inches in more interesting ones – and to record where things were found by measuring down from the original ground surface. Further excavations in the 1970s by Zuraina Majid for her Berkeley PhD provided important additional information, including new radiocarbon dates, but failed to resolve the debates about the original discoveries.
Was the skull really 40,000 years old? And was there really, as Tom Harrisson also claimed, a record of unbroken human occupation from that time until the present?