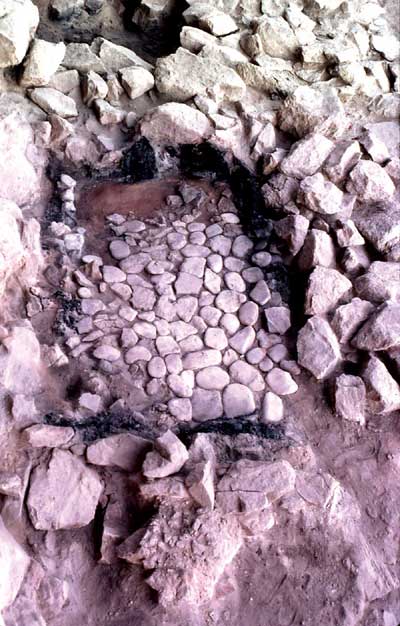 Megalithic tombs, writes Lawrence Barfield, are a distinctive feature of northern and western European prehistory between 5000 and 3000 BC, but where is the eastern boundary of this tradition? On e place where we can study it is in northern Italy during the 3rd millennium B.C. Here the only megalithic tombs are those of Saint Martin de Corléans, just outside Aosta in the western Alps. Despite this, one key aspect of the megalithic tradition, in its broadest sense, did establish itself in northern Italy: the practice of collective burial. Evidence of collective burials is found in caves and rock, along the southern edge of Alps, known as the Civate Group, as far as the beauty spot of Lake Garda.

The distribution of these rock shelter burials and statue-menhirs give the impression that we are on the edge of the megalithic world of western Europe, which peters out as we moved eastwards across northern Italy, coming to an end roughly on the axis of Lake Garda and the Adige valley.

It came as something of a surprise, therefore, when in 1981 a whole cemetery of tomb chambers, containing collective burials was found at Manerba on the western shore of Lake Garda. These chambers, however, were not built of stone but of wood; a fact that can perhaps be attributed to the unsuitability of the local rock for megalithic construction.

The cemetery lies along and within the length of a 40m long rock shelter, called the Riparo Valtenesi, along the shore of Lake Garda and beneath the imposing 90m high cliff of Sasso. The archaeological deposits had, unfortunately, been badly damaged by Roman and later ‘quarrying’ for stone for lime burning. Nonetheless, a series of eight burial ‘contexts’ were recovered from within the rock shelter. The Roman quarrymen appear to have deliberately avoided disturbing the earlier burial deposits and these they left as ‘islands’. Thus, their quarry pits closely skirt the burial deposits leaving them intact. At one point to the north of the site it was even possible to see how some of the stones had been removed revealing intact bones below, following which no further encroachment had been made. This avoidance may have been due to general fear of the spirits or a respect for the dead, or equally plausibly it may have been because of an edict of the Emperor Augustus forbidding the disturbance of burials.

The burial areas included five structures that had been wooden tombs all indicated by laid pebble floors measuring a standard 1 x 2 metres in size. Traces of surrounding beam slots were found around two and actual carbonised oak structures in a third. Other burial features included a cremation pit and other damaged burial structures that are difficult to interpret.

Our best view of the sequence of ritual activity came from a set of four graves labelled MS 132- 135 within the group known as the ‘northern chambers’ (see plan). Here, before the local population had even constructed the tombs, they levelled the surface of the rock shelter, and carried out ritual activities. The latter involved the construction and use of hearths, plus the erection of two large isolated posts. We think it likely that the two post holes once held wooden statues, a suggestion based on analogy with similar type sites, such as that of Aosta in the Alps.

Of interest was our discovery of a mass of grave goods, including ground stone axes, arrowheads and pottery; but above all beads of white calcite, black ‘steatite’ (probably different kinds of soft black rock), perforated animal bones, and dog/wolf and pig teeth and shells such as Columbella rustica. In total, more than 2000 elements were recovered, all of which seem to have been put in as complete necklaces – sometimes after the deposition, and decomposition, of the bodies. In one case the carbonised ‘thread’ was preserved, and turned out to be of animal fibre. Beads were found with every burial context and no fewer than 17 individual necklaces were identified. Copper was also present in the form of small awls and beads.

All the graves seem to have been dismantled or deliberately set on fire – at the moment in which they were covered by platforms of boulders. Flint strike-a-lights were common on the site and appear to have been cached so that ritual fires could be lit when needed; two were even found in two of the burnt chambers.

The stone platform used to cover the chambers was constructed in two parts which together form a continuous flat-topped stone cairn. It contained an internal alignment of boulders, which may either have been structural or symbolic, and which totally sealed in the burials so that their contents, at least in three cases, have remained completely undisturbed since the 3rd millennium BC.

Both before and during the construction of the platforms large quantities of cereals, seeds, and fruits were burnt and deposited around the site in discrete layers. A small stone hearth was found where many of the plant remains had clearly been burnt. Further burnt fruit came from chamber 133 and from the burial cist containing the child burial (as described above).

Finally, some further activity – perhaps ritual – had continued after the construction of the platform, since we also found later hearths and pottery. It is unclear whether this in some way commemorated the dead below the platform, or whether it was associated with continuing burial activity elsewhere in the cemetery.

A variety of rituals

When we looked at all the evidence, we were particularly interested in the fact that there were variations in ritual activity in almost every context in the northern chambers. Some tombs had been dismantled, others burnt; in some the skulls had been removed in others not, in some bones had been removed for burning in others they had been left in the chambers; polished pebbles occurred in one tomb and an infant cist burial was found with another.

This variety of practice was also noted elsewhere on the site. For example, the sequence associated with the southern chamber (see site plan) differed totally from all of the other burial deposits. Here, beneath the floor of the chamber was a double pit containing the dismembered and broken bones of a single individual, clearly defleshed before deposition. We can thus be certain that both intact deposition and secondary (defleshed) burial practices were taking place on the site.

The presence of burials in the very wall of the rock shelter suggests a desire to insert the burials specifically into the rock face. To me, this indicates that the cliff itself had a mythical symbolism associated with the tribe making the burials, and that niches at the cliff’s foot might have been seen as liminal entrances for the dead into a netherworld. Even today the Sasso has an iconic significance in its use in the town’s coat of arms. A similar combination of niches, rock shelters and cliff faces is found on other sites of the so-called Civate group, such as at nearby Monte Covolo which we excavated in the 1990s. We can perhaps go further in our speculation since the stone ‘sealing’ platforms used at Manerba are made of the same rock as the cliff face, and may have been seen as a way of enveloping the dead in the rock.

Despite the potentially local ritual ideology, the ritual funerary sequence shows a remarkable similarity with that found in wooden chambers from earthen long barrows in Britain and elsewhere in northern Europe, built almost a thousand years before the Manerba cemetery. Firstly we can note in both cases that there is a reversal of the chronological relationship between the platform/burial mound and the chamber construction and burial use; in megaliths the chamber is built as part of cairn construction; in wooden constructions the cairn/mound was later. Then at Manerba the two burnt chambers were set on fire at the time of the construction of the cairn or platform, a fact that is clearly demonstrated by the fact that the cairn stones were reddened by the fire. An identical procedure was noted in the Nutbane long barrow in England. Such similarities suggest long lasting traditions of adaptation to local conditions within the western Neolithic.

From Mesolithic to Neolithic

Two further archaeological finds from the rock shelter are of interest. The first was a small area of settlement activity that pre-dated the Copper Age cemetery and can be dated to the transition between the Mesolithic and Neolithic. Here pottery related to the Early Neolithic Vhò culture was directly associated with a flint industry typical of the late Mesolithic Castelnovian culture. There has been much debate recently as to whether or not there was a hiatus between the Mesolithic and the Early Neolithic or whether there was a continuity from the Mesolithic to the Neolithic in this area. This material points undoubtedly to the fact that there was a merging of the two traditions.

Thus Manerba is unlocking a number of key questions about this period of prehistory. It is helping us to understand a distinctive variation of European megalithsmus at its very eastern extremity. Our work has revealed a tradition that demonstrates cultural continuity with megalithic traditions found elsewhere in Europe, but also one that includes potent local variations, and local ideologies – at the very place where the European tradition of megalithic and collective burial ends.