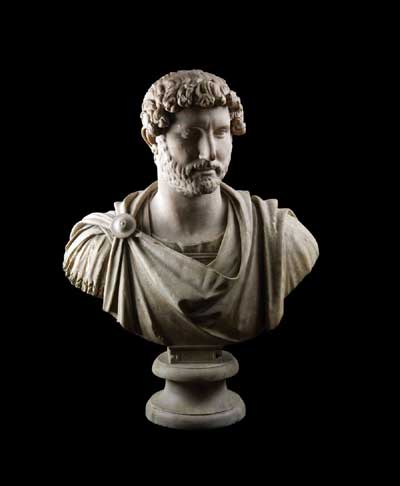 Neil Faulkner, the Features Editor of our sister magazine Current Archaeology, has written a new book entitled Rome: empire of the eagles. Here, as an adjunct to the exhibition, we offer an extended extract from Faulkner’s book in which he deals with the life and times of Hadrian.

Hadrian, like his predecessor Trajan, was Romano-Spanish. The two men were, in fact, related, and after Hadrian’s father had died when the boy was ten, he had been entrusted to Trajan’s care. Much later, he was married to Trajan’s great-niece, Sabina. It was a loveless marriage without affection or issue, but one convenient in fixing Hadrian’s position at the centre of his patron’s network. Close family ties made Hadrian trustworthy; but he was also intelligent, well educated and energetic, a man suited to high responsibility.

By the time of his elevation in AD 117, he was already a veteran general, having served in all three of Trajan’s wars – as a staff officer in the Second Dacian War, a legionary commander in the Third, and, successively, as Governor of Syria and then commander-in-chief during the Parthian War. Even so, the accession was murky and contested. But what issue lay at the heart of the bloody clash at the top that inaugurated Hadrian’s principate?

The written sources for Hadrian’s reign are poor, and we have few details of the generals’ plot of AD 117. Before reaching his capital, Hadrian’s Praetorian Prefect had arrested, condemned and executed four of Trajan’s leading marshals, charged with plotting against the new emperor. Probably, with some reason, they had argued that Hadrian was neither the appointed successor, nor an appropriate candidate. Trajan’s death had been sudden. No heir had been publicly announced – perhaps for fear of igniting animosities among the army commanders. But Hadrian was the late emperor’s ward, favourite, nephew by marriage, and commander-in-chief in the East, so perhaps his inheritance was implicit. The formal announcement, however, and the passing on of the imperial signet-ring had been a deathbed scene witnessed only by Trajan’s wife, Hadrian’s mother-in-law, the Praetorian Prefect, and a personal servant of the emperor – who, suspiciously, died suddenly soon after the event. The succession document bore his wife’s, not Trajan’s, signature.

Was Hadrian, perhaps, a usurper? The new emperor was certainly at pains to win approval. He spent almost a month among the soldiers before arriving in the capital, determined first to show his face to the frontier legions and collect their acclamations. Then, a shower of largesse: large donatives were paid to the soldiers and the city mob; ‘coronation gold’, a tax traditionally paid at the accession of a new emperor, was remitted for Italy and reduced in the provinces; and all debts to the state were cancelled, at the spectacular cost of 225 million denarii.

The root of both the plotters’ malevolence and the emperor’s anxiety lay, almost certainly, in a deep split within the army command about the military débâcle in the East and the future direction of the empire. Trajan’s invasion of Mesopotamia had provoked intractable resistance and revolt in the rear. Hadrian had resolved to pull out and consolidate. More than that: to stamp this policy on the empire forever. The contrast between the politics of Trajan and those of his protégé could not have been more radically different. Two men, both reared in the same stable, the one the pampered favourite and intimate of the other, reached diametrically opposed conclusions about how the empire should be governed. And while both were ideologically driven, Trajan’s vision was a reactionary one, an attempt to return to the glory days of war and conquest, whereas Hadrian was a radical trying to make sense of new realities and fashion a new model empire. It was, perhaps, crucial that he was a provincial emperor. Having been reared in Spain, he had travelled during his career in Gaul, Germany, the Balkans, Asia Minor, the Levant, and Mesopotamia. Italy, for him, was just one among the many provinces of the empire.

He was the first emperor for whom the traditional imperial title pater patriae (father of his country) – which, like his model, Augustus, he adopted only at the end of his reign – meant not merely protector and patron of Rome and Italy, but of all the provinces of the empire. He wished to raise all to the same level of peace, prosperity, good governance, urban life, and classical culture; to create a commonwealth of peoples enjoying the benefits of the Pax Romana and united by their allegiance to emperor, empire, and Roman values. Thus would the empire grow stronger within. Thus would its people more willingly shoulder the burden of defence. Thus would the frontiers – now better defined, fortified and garrisoned – more easily be held. Hadrian set out to create a dichotomous world, in which the difference between civilization and barbarism was to be made sharper, the boundaries between them more rigid and immutable. It was a vision and a policy for an empire that had reached its limits.