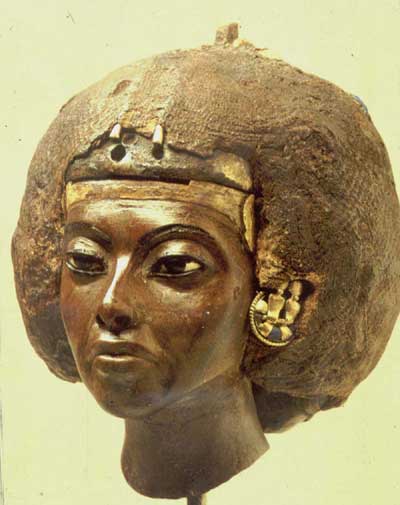 How does one recognise a royal harem in ancient Egypt? There are several hieroglyphic references to what appear to be harems or women’s quarters.

Recently a specific building type has been proposed as a harem. But at only one site – that of Gurob – have Egyptologists found both royal ‘harem’ architecture and inscriptions. Ian Shaw of the University of Liverpool is currently undertaking a major campaign at Gurob and here he tells of his work there. As for what went on in a royal harem in ancient Egypt, read on.Gurob lies not in the Nile Valley itself but is tucked away in the Fayum, the oasis to the west of the Nile into which a branch of the Nile sometimes flows. It was established by King Thutmose III (1479-1425 BC) and flourished during the reign of Amenhotep III (1391-1353 BC). A royal harem seems to have existed there for much of the New Kingdom – or at least from the reign of Thutmose III to some point in the 20th Dynasty, that is from about 1480-1150 BC.

But what was a royal harem in ancient Egypt? Several different words were used by the ancient Egyptians to describe places and phenomena that we might translate as some kind of ‘harem’ – an Arabic word literally meaning ‘forbidden’ or ‘inviolable’.

Thus the ancient Egyptian term ipet nesut was used to denote the ‘royal private quarters’ or ‘royal apartment/granary’, while the term kap seems to have been used to refer to a kind of school or nursery within palaces where it is presumed some of the wives and their children were housed. In addition, the Egyptian term khener – which derives from a verb meaning ‘to restrain, confine’ – is used by Egyptologists to describe an administrative institution connected with royal women and probably attached to pharaonic palaces and villas during the New Kingdom.

It is the term khener that is usually translated as ‘harem’ (referring both to the place and to its inhabitants), but the translation can be confusing not least since we end up thinking of an Ottoman harem, which tends to be the example best-known to westerners, and conjures visions of a cosseted group of beautiful and sensuous women whose sole duty was to entertain the sultan.

However, as far as ancient Egypt is concerned, the surviving texts describe the ‘harem’ as an important economic institution supported by taxation, and receiving regular supplies of rations. On the other hand, the archaeological remains at some royal settlements suggest the domestic apartments of the king and his royal women. These royal harems would have included not only Egyptian women and their children, but also large numbers of foreigners married by the Egyptian king primarily in order to establish diplomatic links with the Hittite and Mitannian royal courts. For example, in Year 34 the Egyptian bonds with the Hittites were strengthened by a marriage between Rameses and a daughter of the Hittite King Hattusili. The daughter was received with much pomp and circumstance and was given the Egyptian name Neferura-who-beholds- Horus. This event was recorded on the ‘marriage stele’ in Ramesses’ temple at Abu Simbel, and also on Papyrus UCL 32795 from the likely harem palace at Gurob, which refers to …the king’s wife Maathorneferura (may she live) (the daughter) of the ruler of Khatti.

In a monograph on the New Kingdom royal city published in 1997, the American scholar Peter Lacovara put the study of harems on a whole new basis. He attempted to create a set of criteria that could be used to determine whether a particular building or a group of structures could be interpreted as a royal harem. He argued that there was probably a standardised plan for New Kingdom harem palaces (with a possible Middle Kingdom precedent at Tell el-Dab’a). He suggests, on the basis of likely examples at the ancient cities of Malkata, Amarna and Gurob, that each harem palace probably consisted of a pair of adjacent buildings – each divided into two by partition walls – one larger than the other. He proposed that one of the buildings was probably the residential quarter (characterized more by columned rooms) while the other was divided into small rooms probably used for storage and food production.

In summary a royal harem in ancient Egypt seems to have been a large and highly privileged female community, perhaps independent from the main royal court itself. But how do we identify its presence? And why is it that we think Gorub was a harem? Is Gurob the site of a royal harem of the 18th-20th Dynasties? Gurob is a crucial site for the study of harems because it is the only ‘harem’ site that combines in situ architectural remains with epigraphic evidence.

Gurob – or Medinet el-Gurob, which translates as ‘City of the Crows’ – combines a New Kingdom settlement with a cemetery site. Many aspects of the inscriptions, papyri and archaeological remains suggest that the principal raison d’etre of this settlement was to maintain an important royal harem.

Gurob has been identified with Mer-wer (‘great channel/canal’), a town established by Thutmose III (1479-1425 BC). Gurob appears to have flourished as a harem-town for many centuries during the Ramessid period (1295- 1069 BC). However, its character seems to have changed with the passage of time. Thus, the presence of house remains above palace enclosures suggests that the Tuthmosid harem palace phase was succeeded by a later phase of settlement.

Our knowledge of Gurob builds on many years of research. The site was first excavated by the great Egyptologist Flinders Petrie. In two seasons at the site (1888-89) Petrie – or rather one of his assistants – uncovered part of the New Kingdom town, a large building that he identified as a temple, and cemeteries dating to the New Kingdom and the Ptolemaic period (332-30 BC). The early work of subsequent British archaeologists concentrated primarily on the cemeteries, which ranged in date from the protodynastic period (3200-2900 BC) to the Ptolemaic period (332-30 BC).

However, one of these later excavators, W.L.S. Loat, tantalisingly mentions the remains of a small 18th-Dynasty village about 50m from the main town, which may have been an early New Kingdom settlement. In 1905 the town was investigated briefly by the German archaeologist Ludwig Borchardt. It was he who suggested that the main enclosure-wall contained not a temple – as Petrie had suggested – but a late 18th-Dynasty palace and harem as well as the town itself. A highlight of Borchardt’s work was the discovery of a superb bust of Queen Tiye, the principal wife of Amenhotep III, and mother of Akhenaten. Her ‘shrewd and world-weary expression… makes this head perhaps the most individually conceived female portrait known from ancient Egypt’ (to quote archaeologists Baines and Malek). During the 1960s and 70s, Gurob became an Egyptian military site, and no archaeologist was welcome. However in 1978 Cambridge Egyptologist Barry Kemp synthesized the results of the various excavations to construct an impression of a New Kingdom harem-town which might have superseded the earlier village, but was itself eventually transformed into a small Ramessid town.

In 1984, shortly after the site had ceased to be a military area, the intrepid Peter Lacovara paid a one-day visit and found that the remains had not been badly damaged by the Egyptian army. He made a stratigraphic section drawing in the southern part of the site which appeared to confirm that there were two distinct phases of settlement at Gurob, an earlier (harem) phase and the later Ramessid phase. However, nothing more was done at the site until 2005, when our team from Liverpool got to work.

Current revelations at Gurob The main aim of The University of Liverpool Gurob Harem Palace Survey has been to gain a more sophisticated understanding of the nature of urbanisation in Egypt in the late Bronze Age.

But in particular we want to understand the evolution of the highly specialised city of Gurob and its ever changing relationship to the surrounding landscape of the Fayum region.

Before embarking on our investigations, we faced one major hurdle: current regulations of the Supreme Council of Antiquities in Egypt preclude any excavation of the site – they want excavations to be concentrated in the delta region to the north where the sites are less well known but more at threat. In response, our survey is geared towards the many other non-invasive methods now available to the archaeologist.

So far we have made excellent progress mapping the site, made a huge collection of surface pottery, and undertaken extensive geophysical survey. As well as mapping some of the basic features of the town site, we have begun to produce more detailed plans of some of the best surviving architectural features, such as the enigmatic circular mud brick constructions in the northern palace building, a section of the town wall to the north east of the main palace area, plus a glass-making zone. This was clearly a wellorganised, and no-doubt fairly self-sufficient town. As for our systematic surface pottery survey, so far we have collected over 26,000 potsherds weighing a mighty 370 kilograms, and including 1,600 diagnostic sherds – rims, bases, handles, decorated body sherds and gaming counters, nearly all dating to the New Kingdom, particularly relating to the 18th and 19th dynasties. The pottery has been of great help in establishing the chronology of the site. For example, we found a few Old Kingdom diagnostic sherds, suggesting that there may have been a settlement there 2,000 years earlier than the 1480 BC date we usually suggest for its establishment.

We are now well advanced in producing a fundamental corpus of the characteristic fabrics and forms of pottery vessels at Gurob, which we will be able to tie into the wider picture of pottery types of ancient Egypt. In future seasons we also plan to use auger boring, alongside other geophysical techniques, to gain a clearer sense of the sub-surface remains at Gurob.

Life in the Gurob harem Far from being the refuge of a bevy of bellydancing beauties as in an Ottoman-inspired vision, it seems that the harem at Gurob was populated by a fairly large, privileged, but also fairly self-sufficient arm of the royal palace. And according to the texts, the women worked – generally on specialist tasks including the weaving of linen, an activity that is well attested both archaeologically and textually at Gurob.

Papyrus UCL 32795 from the Petrie collection from Gurob contains references to royal linen, head-cloths, bag-tunic and triangular cloths – all of the first quality.

However, the royal female harem was not simply a woman’s world. The men played a vital role: the Gurob harem was administered by male officials as tax collectors and scribes whose names have been preserved under the titles of numerous documents. Three stelae from the temple of Tuthmose III bear the names of Usermaatra-em-heb, the deputy of the harem of Mer-Wer, Iy, the overseer of the royal harem, and Djarwy, servant of the harem. An object from the palace itself is inscribed with the name of Sety, royal scribe overseer of the women of the harem of Mer-Wer, and then the New Kingdom cemeteries of Gurob have three officials named on objects, a deputy, a scribe and a controller, while a further three harem bureaucrats are named on papyri.

Our knowledge of ancient Egyptian harems, this most sacrosanct of site-type, is far from complete. Yet of all the harems tentatively identified so far, Gurob has offered up the most information. And Gurob, we suspect, will have yet more to reveal in future seasons.