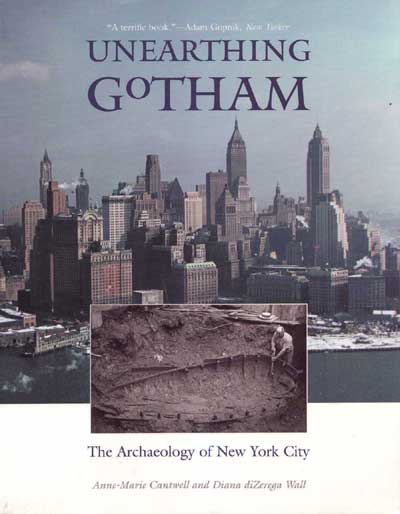 Where is Gotham? Apparently it is New York, the place where Batman lives, and Unearthing Gotham: The Archaeology of New York City by Anna-Marie Cantwell and Diana diZerega Wall, (Yale University Press, paperback £12.95) provides a fascinating account of a city where one would not expect to find much archaeology. The story divides into two halves, half up to the arrival of Henry Hudson in 1609, and the second half the colonial story since then. Pre-contact New York was occupied by the Munsees, a branch of the Delaware Indians, but their activities were fairly meagre and it is perhaps ironic that most of the remains are those discovered by amateur archaeologists in the first half of the 20th century.
The second half of the book takes on a different pace. Over the past twenty years, a form of developer funding has been somewhat patchily enforced on the larger developers, and as a result a considerable number of large scale excavations have been undertaken. The authors adopt the technique of selecting several key sites and then examining them in detail, with the result that much of the book is more historical than archaeological, extracting information from census and tax records and then comparing it with the archaeological findings.
There is an excellent account of what happened between 1790 and 1830 when New York really took off. Up to 1790 most families lived and worked in the same place, but in these 40 years, home and workshop became separated, with the father going off to work in the city around Wall Street, while mother stayed at home to look after the home and family. The changes can be seen in the ceramics. Around 1790 ordinary ceramics disappear from the city centre, and only glasses and drinking vessels are found. But in the suburbs, middle class family life becomes more complicated. Instead of everyone eating at midday from a one-pot dish, the main dinner took place in the evening and became ever more elaborate. At first it was the tea sets that became elaborate when outsiders were invited to tea, but from the 1820s even the ordinary dinner ware became more sophisticated as formal dinners became the fashion. And the women, as the authors (both women) point out, began to feel isolated in the home.
Other parts of the city were also changing. The water fronts were built up almost entirely by private enterprise as the city government, to raise revenue, sold ‘water lots’ or the right to build wharves and ‘make land’ out in the river; as a result, the modern water front is on average three blocks out from the original waterfront.
The hinterland of New York also changed, from farms to country houses to modern suburbia, and a fascinating final chapter charts the discovery of an African burial ground, unexpectedly discovered 15 feet down, where the land had, unbeknownst to the developers, been built up. In the 18th century, New York had a large slave population and this is the burial ground of the slaves, analysis of whose bones reveal the extent of their mistreatment. The site aroused great controversy, and eventually the development was abandoned.
This is a model account of how the archaeology of an early modern city should be handled. However, the book is badly let down by the almost total absence of proper maps and plans, so one has to guess where the places are and their relationship to each other. But apart from that it is a fascinating account of the rise to greatness of one of the world’s great cities. But it is a silly title!