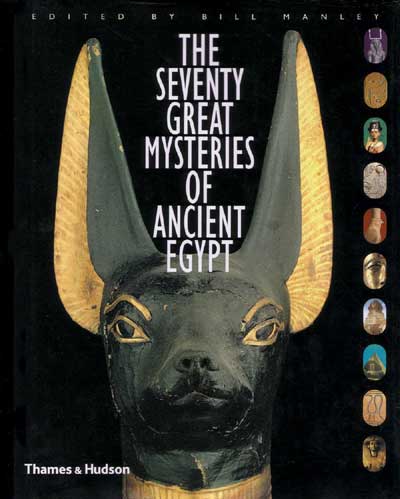 The Seventy Great Mysteries of Ancient Egypt
Ed. Bill Manley, Thames and Hudson, £24.95
Were the pyramids built by slaves? Did the pharaohs marry their sisters? Are there more royal tombs yet to be discovered in Egypt? These are just three of the 70 mysteries broached by 17 eminent Egyptologists and archaeologists in this all-colour sprint through ancient Egyptian history. Edited by the distinguished Egyptologist, Bill Manley, The Seventy Great Mysteries of Ancient Egypt uses recent research and discoveries to provide a comprehensive, up-to-date, and entertaining introduction to one of the world’s most compelling ancient peoples.
But although the book provides solutions to some of Egyptology’s greatest riddles, some remain shrouded in mystery. Take, for example, the conundrum of Punt, a magical place, source of aromatics and exotic products, and evocatively known to the ancient Egyptians as ‘God’s Land’. Today, no-one knows exactly where Punt really was: Yemen, Eritrea, Somalia, or somewhere else? There survive only a dozen or so Egyptian texts that mention this elusive land, and all fail to give any clue of the distances or journey times involved. In fact, the best information about Punt comes not in the texts, but from the fabulous reliefs that adorn Queen Hatshepsut’s temple at Deir el-Bahri. Hatshepsut’s finely-executed sculptures show the people of Punt, including the Puntite chief’s obese wife, their houses shaped like beehives and mounted on stilts, their produce, and their animals. Such is the detail of the depictions, that archaeologists have even been able to identify the varieties of fish shown swimming in an unknown sea. If only the land of Punt could be identified, archaeologists would have so much more information, not only about ancient Egyptian connections with other lands (Punt was known to the Egyptians for over 2000 years), but also about the very land of Punt to which the Egyptians travelled. Since arguments still rage over Punt’s whereabouts, the reader is offered all the possible locations – including the latest view that ‘God’s Land’ was probably somewhere in the region of Ethiopia and eastern Sudan.
From God’s Land to the gods themselves, this book has it all. The book is organised into seven topics, and within the subject ‘Ancient Wisdom and Belief’, we get a round-up of the gods of Egypt, find out whether the king was really a god, and learn about the ancient Egyptian power of magic. Plus, intriguingly, we get the answer to the question: ‘why write letters to the dead?’. Although writing to the dead may seem bizarre, it is the content of these letters that is even stranger. Letters to the dead were not resumés of family events, nor did they ask how the deceased were getting on in the afterlife. Instead, they dealt with the problems of the living: debt, illness, bad-luck, and all manner of worries. The living wrote with the expectation that the dead would help them out, and sometimes even chastised their dead relatives for not having done more already to help them. To the ancient Egyptians, many things, such as disease, were thought to lie outside the direct control of humans, but within the control of the gods and spirits. Hence the letters: if a problem was the result of a malevolent spirit, then who better to help you than a beneficial spirit of your own?
As the book highlights, the Egyptians believed in an inexorable link between the spirit world and people. However, this link is most powerfully embodied in Egypt’s ancient rulers, whose godly status they unquestioningly accepted. Although these erstwhile leaders are probably not gods in our eyes, a number have certainly gained the immortality they coveted so greatly: their names remain known to us today – even if most of us do not know much about their lives. Again, this book comes up trumps, delving into the mysteries that surround the best-known ancient leaders, thereby providing an invaluable introduction to each. Hot on the heals of the conspiracy of the boy-king, Tutankhamen, comes a look at the fatal-attraction of Cleopatra, the disappearance of Nefertiti, the fate of Hatshepsut, and the enigma of Akhenaten.
Each brief (running at most to four pages), yet revelationary, account not only lays bare the mysteries, but is chock-full of fascinating snippets; such as the fact that Cleopatra was probably nothing special to look at, but was a sparkling wit; or the likelihood that the great Sphinx at Giza was once painted in bright colours – the face and body were probably red, while the stripes of the headdress were of alternating blue and yellow.
Incidentally, the answers to the questions posed at the start of this review are: probably not, yes, and must be. Intrigued to know the reasons why? Then this comprehensive, accessible, and entertaining book is one for you.