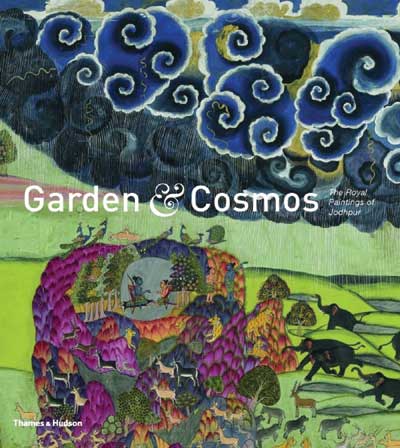 ‘The paintings handed down by my ancestors are perhaps the most important of the Jodhpur royal collections’, writes the present maharaja of Jodhpur in his foreword to Garden & Cosmos, the excellent and lavish catalogue of an exhibition scheduled for the British Museum and National Museum of India during 2009. He also notes that this is ‘the first major international exposition of Marwar paintings’.

The works belong to the great, forbidding fort of Mehrangarh in Jodhpur. While the fort was started in 1459 – the date of the founding of the kingdom of Jodhpur-Marwar by Rao Jodha, head of the Rathore clan of Rajputs – the earliest securely dated painted manuscript from Marwar dates from 1623. The paintings at the centre of the exhibition were created in the long period of Mughal decline after the death of the emperor Aurangzeb in 1707.

Although clearly influenced by Mughal painting, they also display their own subject matter and styles.

Most were painted under the aegis of three Rathore rulers, each of whom is given a separate section in the catalogue. Their preoccupations as patrons were strikingly different, ranging from the purely hedonistic to the intensely spiritual.

Bakhat Singh, a second son of a ruler of Marwar, reigned at Nagaur (Nagore), less than a hundred miles northeast of Jodhpur in the direction of Delhi, from 1725-1751. Nagaur was an important site in the Sultanate period, prior to the Mughal conquest; Muslim rulers first established themselves there in 1111 with the building of the Ahhichatragarh (‘the fort of the hooded cobra’). Bakhat Singh was given his position by his elder brother, heir to the throne, as a reward for stabbing their father to death—apparently out of political ambition and with the connivance of his brother. At Nagaur, he established a court and an atelier that concentrated on the pleasures of court life, both inside the palace and in the palace gardens. In 1751, he moved to Jodhpur and ascended the throne as maharaja. Despite his being poisoned in 1752, some Nagaur artists continued to paint in Jodhpur.

The next ruler of Marwar, Vijai Singh, was pious. In 1765, he was initiated into the Hindu religious community founded by the saint Vallabha. It espouses joyous devotion to Krishna. The works commissioned by Vijai Singh therefore focus on depicting the Krishna legend, in some cases on a ‘monumental’ scale by the standards of Indian miniature painting, with scenes as wide as 135cm, along with some other episodes from Hindu scripture.

The third ruler, Man Singh, who reigned from 1803-1843, was also pious and continued the monumental tradition. But his devotion was to the Naths, one of Marwar’s many religious communities, founded by the ascetic Jallandharnath. The paintings commissioned by Man Singh focus on Jallandharnath, Nath worship and Nath metaphysics, including attempts to depict the Absolute (unusual among South Asian artists).

There is much that will charm, delight and fascinate in all three bodies of work. But Bakhat Singh’s atelier will likely have the widest public appeal. Partly because its subject matter is not avowedly religious or esoteric, but also because its human figures offer more individuality and its compositions are more arresting than those in the more orthodox works painted under Vijai Singh and Man Singh. Moreover, the subjects at Nagaur possess a certain freshness. Most do not illustrate the traditional, martial, Rajput pursuits depicted by other Rajasthan studios. A lovely example is Amusements on a Moonlit Water Terrace, dated to around 1729-1732. It shows the young yellow-turbaned Bakhat Singh entertained by brightly attired ladies with wine, food and music. In this image, both garden and cosmos appear exquisitely balanced.

Book review by Andrew Robinson, the author of The Story of Writing: Alphabets, Hieroglyphs and Pictograms, and Lost Languages: The Enigma of the World’s Undeciphered Scripts, plus several books on India.