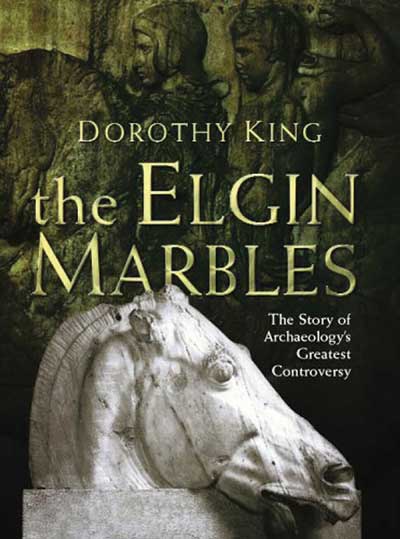 Visitors to Athens tend to spend most of their time pursuing the remains of the great Classical city. They will probably note with horror the monstrosities of the modern city and they may possibly, if they are lucky, come across the fascinating remains of medieval and early modern Athens. After the Classical era, Athens had a tortuous history. It suffered badly from the Christians who closed the universities on which their prosperity depended, staggered along through the Byzantine period, and was then invaded by the Crusaders, then by the Ottomans and then by the Venetians, who in fighting the Ottomans blew up the Parthenon. It is only with the declaration of the Greek State in 1832 that Greek history again becomes something of which the Greeks can be proud.

The Elgin Marbles by Dorothy King is two books rolled into one. The second, and more controversial part, deals with the controversies over the Elgin Marbles in the British Museum. But the main part of the book tells the fascinating story of the Parthenon at Athens through the ages. It begins by looking at the construction of the Parthenon, and takes a slightly cynical view of Pericles. He was one of those elected semi-dictators who got things done, and who has had perhaps an unduly favourable press due to the splendid funerary oration that Thucydides puts into his mouth. The central part of the book is an account of the Parthenon, and indeed Athens and Greece, through the Middle Ages, when the Parthenon survived more or less complete, being turned first into a Christian Church and then into a mosque with a large minaret adjacent to it. This all comes to an end when the Venetians besieged the city: gunpowder is stored in the Parthenon, the Venetians shell it, there is a huge explosion, destroying the centre of the temple and killing 200 people.

The final third of the book then deals with the story of how Lord Elgin set about rescuing the marbles from the ruins and bringing them back to London and the British Museum. It is only in the final chapter that she comes to the debate of the Elgin Marbles: who owns them and where do they belong? The author has become one of the leading protagonists opposing the return of the Marbles: she says ‘I came to oppose the Greek demands for the return of the Elgin Marbles when I was living and working in Greece. … Until recently this has been a one sided debate: the British have a strong sense of fair play, and if we have wronged someone we wish to right that wrong’. She then presents the various arguments for and against restitution: we should remember that this is a political campaign in Greece led by the PASOK, the Greek socialist party. There is the argument that the marbles have become a part of the British heritage, and a pretty iconic part. There is the argument that once restitution starts, where will it end? She offers an interesting side light on the difficulty the Smithsonian Museum in Washington had in trying to hand over their Indian collections to the Native Americans; most of the tribes they contacted did not even bother to answer the letters they were sent. ‘The demands for return came not from Native American communities but from liberal politically correct white individuals’. And then she counter attacks the Greeks for their record of preservation: that they appear to have cleaned their marbles much more harshly than the British Museum has ever done; she has had difficulty in examining Greek Sculpture in Greece; and then there is the Olympic rowing lake that was constructed over the site of the battle of Marathon; and finally she points out that the British Museum displays the marbles well, receives more visitors than they would do in Athens; and that it displays them for free. This final chapter should certainly be required reading for those carried away by rhetoric of returning the Marbles to Greece.

This, however, is only a very small part of the book, and if any of our readers are intending to visit Greece, I would strongly recommend this book as an admirable introduction to the country’s history.