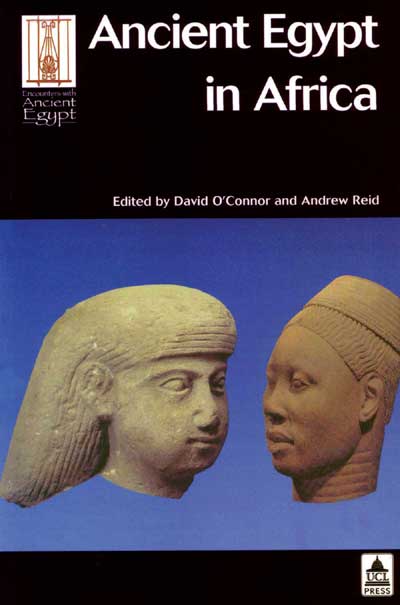 The publication of eight books simultaneously is a major event and eight books have recently been published by University College London (UCL) Press on Egyptology. However, these are not like any previous books on Egyptology, and it is tempting to say that they tell us more about UCL and its Director, Peter Ucko, than they do about Egyptology. Potential readers should be aware that these books are, as they say, shooting a line. The discipline of Egyptology, they proclaim, has been criticised for being too insular, with little awareness of the development of archaeology elsewhere. It has remained theoretically under-developed. The series sets out to remedy this. However there are theories and theories, – and this bears little resemblance to the Cambridge theoretical approach of scholars like Kemp. Instead, this is the theory of what I believe is called post-modernism. It sets out to look at the biases, prejudices, and preconceptions with which Ancient Egypt has been viewed. All the books consist of a series of essays, but they are remarkably homogeneous and come together very well. Each book costs £25, but they are available as a boxed set for just £165. They can, perhaps, be divided into four groups.
We could begin with an Historical Group. Never Had the Like Occurred edited by John Tait, looks at Egypt’s view of its own past, and how this subtly changed during the long range of Egyptian history. Ancient Per-spectives on Egypt edited by Roger Matthews and Cornelia Roemer, looks firstly at the interactions between Ancient Egypt and the East Mediterranean, and then at the Greek discovery of Egypt, with a somewhat patronising view of Herodotus. The Wisdom of Egypt: changing visions through the ages, edited by Peter Ucko and Timothy Champion, runs from Classical views and medieval Arabic writings, down to 17th and 18th century England. Then, in Views of Ancient Egypt since Napoleon Bonaparte edited by David Jeffreys, the subtitle says it all: imperialis, colonialism, and modern appropriations.
There are two books with a more geographical basis. Mysterious Lands, edited by David O’Connor and Stephen Quirke, looks at the fringes of the Egyptian domain, the mysterious land of Punt, where the spices come from, and Libya and the mysterious sea-people. And then there is a book that is in many ways the central book of the whole series: Ancient Egypt in Africa, edited by David O’Connor and Andrew Reid. There has been a movement recently, as championed in Black Athena, to claim Ancient Egypt as part of Africa. Certainly, there is some African influence on Egypt, but what is remarkable, surely, is how distinctive Egypt was from the rest of Africa. Nevertheless, despite their rather extreme Africanist stance, the book succeeds on the whole in staying on the right side of sanity.
And finally, there are two books which look at Egyptology today. Imhotep Today: Egyptianizing architecture edited by Jean-Marcel Humbert and Clifford Price, is the fattest book in the series, and forms a splendid quarry for the influence of Egyptian style throughout the world. Consuming Ancient Egypt by Sally MacDonald and Michael Rice, looks at mummy-mania and how to stage Aida, as well as asking what the tourists learn of Egypt.
All these books are extremely well-written and approachable. The belief that if you are to be seriously theoretical, you must be seriously incomprehensible, is thank heavens, firmly vanquished. I find however I am left with two opposing thoughts. On the one hand, yes, it is fascinating and indeed important, to be aware of prejudices in the past, and to look at the way that Egyptology has been adopted by Hollywood and modern architects and advertisers. But at the same time, I find that there is a constant underlying feeling of irritation: it is all very well to look at other people’s biases, but we are all biased, and modern academia is particularly biased with a strong set of prejudices, which frequently sets it aside from the rest of the modern world. There is a dreadful miasma of ‘political correctness’, which academia swallows whole, but which the rest of the world looks at with considerable suspicion. There is little concern with, say, economics, or asking the question ‘Why was Ancient Egypt so successful? Why were its achievements so enormous?’ There is a constant underlying feeling of denigration, which ultimately becomes rather wearing (don’t they realise that to many outside academia, words like ‘imperialism’ and ‘colonialism’ are a very big turn-off?). There is much in these books that is stimulating and new; but the reader should be aware that it is not just the past that is prejudiced: we, the present, are prejudiced too.