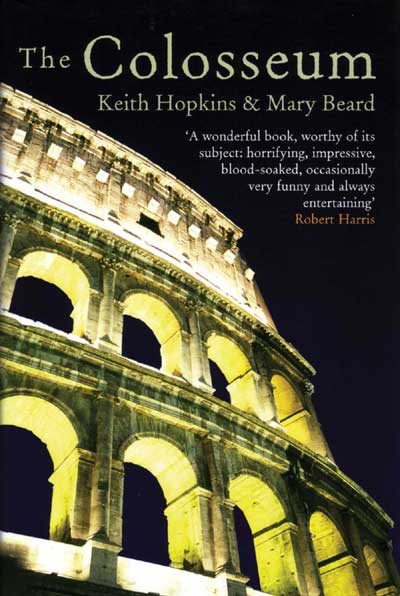 In a medieval, and indeed modern Rome, one building above all dominates the city: the Colosseum. Erected on a swamp in the centre of the city on the ruins of the gardens of Nero’s ill-fated Golden House, it is simply so big that despite all the demolition and its use throughout the Middle Ages as a quarry, it still towers over everything else.

The Colosseum is now the subject of another splendid short book in the Profile Wonders of the World series by Keith Hopkins and Mary Beard. Originally it was begun by Keith Hopkins, the Marxist – or should one say revisionist? – Professor of Classics at Cambridge, but sadly he died before the book was half way through, so this brief text is essentially the work of Mary Beard, the rising, or should one say risen, star of the Cambridge Classics School.

The key question in dealing with the Colosseum is what is the author’s bias? The answer I think is refreshing: there is a lot of debunking of myths, but it ends up leaving the Colosseum bloody enough – even if not quite as bloody as some modern propagandists would like to see it. The trouble is that if we look at the ancient literature, we have essentially two sources: both sides exaggerate, both in the same direction. On one hand there are the emperors or rather their panegyricists, who exaggerated the emperors’ ‘generosity’ in the magnificent shows they put on. On the other hand, there are the accounts of the Christian writers who wanted to emphasise the ‘magnificence’ of the suffering that the Christian martyrs underwent in the arena. We need to look for evidence elsewhere, and the central part of the book is devoted to an assessment of life in the arena, an assessment that is equally valid for arenas everywhere.

Surprisingly many Gladiators were sufficiently successful to leave behind them wives and families affluent enough to set up tombstones to record their successes, and from these and from graffiti at Pompeii and elsewhere it is possible to acquire some sort of statistics. The median age for death for a gladiator was 22.5 years, but many of them seem to have begun at the age of 17 and the successful ones had survived for up to 20 fights; indeed one or two survived for up to 50 fights and then retired. However, this implies that the average gladiator only fought two bouts a year, though the risk of death was somewhere like one in six.

Further statistics can be obtained from Marcus Aurelius’ abolition of the sales tax on gladiators in 177 when a law was passed dividing gladiators into different pay bands, between ‘chorus’ and ‘stars’. From this it can be calculated that there may have been up to 16,000 gladiators in the whole Roman world, but divided between perhaps 400 amphitheatres and other venues; she calculates that most amphitheatres must have been empty or used for something tamer in 360 days out of 365. Gladiator shows were expensive and rare.

Nevertheless, at a death rate of one in six, there could have been 4,000 gladiatorial fatalities per year outside Rome. Add to this say 2,000 deaths amongst the animal attendants and hunters, and a further 2000 deaths at Rome itself, a grand total of 8,000 deaths in the arena a year is the best tentative guesstimate; not much of a burden for an empire with a total population of 50,000 million people, – but 8,000 deaths a years would be equal to 1.5% of the population of 20 year old men.

Not that gladiatorial shows made up the only, or even the biggest part of the shows in the arena: animal hunts were bigger and more elaborate. Indeed some accounts of the exotic animals slain in the Colosseum beggar the imagination to calculate how the animals had been captured in the first place, how they were transported to Rome and then produced on the day in a fighting fit form.

But what of the building itself? Little of the original survives and it has been estimated that perhaps two-thirds of today’s Colosseum is in fact a reconstruction – much of it in the 18th and 19th centuries. Its secret, perhaps, was its exceptionally strong original construction. It was built by Vespasian, financed by his spoils from the Jewish War, a sort of democratic option where he built not for himself, but for the benefit of the people of Rome. It was built over a marsh in the centre of Rome where the ground level had already been raised 4m by the spoil dumped over it following the disastrous fire of AD 64. Nevertheless the foundations went down a full 12m and the authors have obtained a modern contractor’s estimate that it would cost £28 million in today’s money to build the foundations alone.

In the Middle Ages the Colosseum became a favourite quarry. An early effort at preservation was a proposal to turn it into a wool factory, but perhaps more successful were the Christians who began preserving it as a site of holy martyrdom. Byron did his bit by composing an oft repeated verse, but by the 19th century the archaeologists moved in and removed first all the flowers for which it had become famous, and then as far as possible the numerous shrines, so that today it stands in all its confusing glory. This is a slim volume, but Mary Beard has made it a memorable one, a stringent deconstruction of the numerous myths and the presentation of a fascinating picture of Rome’s greatest monument.