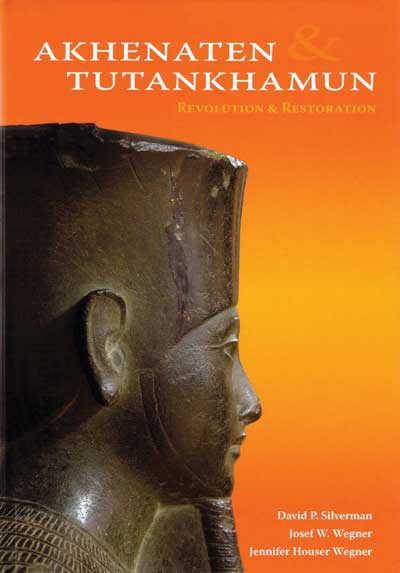 There is no shortage of books on Akhenaten, Tutankhamun and the Amarna period. However, many try to focus on some aspect of the personality of Akhenaten, on his unusual physiognomy or his heresy, while others are concerned with the cause of death of Tutankhamun.

This book, by three well respected scholars from the University of Pennsylvania, takes a somewhat more detached line, and tries instead to summarise some of the key evidence for the reigns of its subjects.

The book will be popular with general readers: considerable effort has been made to clearly show the locations of some of the most well-known finds, such as the famous bust of Nefertiti, and to illustrate the most informative tomb scenes. Similarly, a number of computer-generated reconstructions show buildings in the city of Amarna. Some of the illustrations, however, seem rather out of place. For example, a plan of the Workmen’s Village, showing finds now in Penn Museum, would be more at home as a museum display panel than in this book. There are also a few very poorly reproduced images, such as the shadowy ‘The Temple of Amun at Luxor’, that detract slightly from the otherwise high standard of illustrations.

Despite this, the text is written in a clear and accessible style, guiding the reader through the archaeology of the period. The book’s weakness, however, shows in its lack of reference to sources: where there are quotations from ancient literature, the reader is not directed to the original material. While full in-text referencing is usually regarded by publishers as a distraction for a general audience, some have found ways around it. An example of this can be seen in Nicholas Reeves’s Akhenaten: Egypt’s False Prophet (Thames and Hudson 2001) where sources of quotations can be found by looking in a list at the end of the book. It is a pity that this system has not been followed here, as the book may be popular with undergraduate students, but will not readily facilitate their further research.

The text does not avoid the arguments which make the Amarna period so interesting and controversial, but neither does it try to summarise them in detail. Thus we learn that there is debate about the identity of the enigmatic Pharaoh Smenkhare, but readers are not given sufficient further information on which to base a judgement. For most, however, these will be minor quibbles, and the book will prove an enjoyable introduction to this most controversial period.