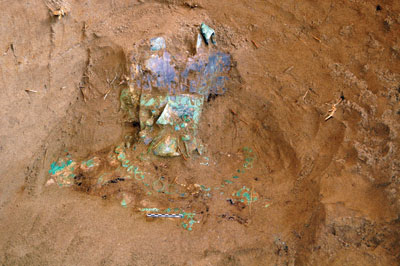 The discovery of a 13th-century priestess at a ritual site in northern Peru is forcing a reassessment of the role of women in Lambayeque culture.

The 25- to 30-year-old woman was buried at Chotuna-Chornancap, adorned with elaborate jewellery, ceramic offerings, and gold and silver ritual objects proclaiming her elite status.

‘This has revolutionised our thinking,’ Project Director Carlos Wester La Torre told CWA. ‘It shows wealth and power were not a male privilege in this culture; this is categorical evidence of women involved in the political and ideological apparatus of the time.’ He added: ‘Her youth indicates the post was hereditary, and her grave goods suggest she performed rituals such as sacrifices, receiving offerings, and celebrating changes of the seasons, the moon, and tides.’

A team from Brüning Archaeological Museum discovered the priestess’s burial in the small palace complex of Chotuna-Chornancap earlier this year. She lay beneath a 6m2 blanket painted with symbols representing the moon and the sea, accompanied by seven other people and a llama. On top of this her mourners had arranged 90 10cm copper discs and pottery stylistically dated to c.AD 1100-1350. The priestess was buried with a mask decorated with stylised tears, as well as a necklace of copper discs, gold and silver earrings, and colourful jewellery made from hundreds of shell beads. There were also ritual objects including large copper knives, engraved silver-embossed bowls, and a gold rod topped with a crowned figure.