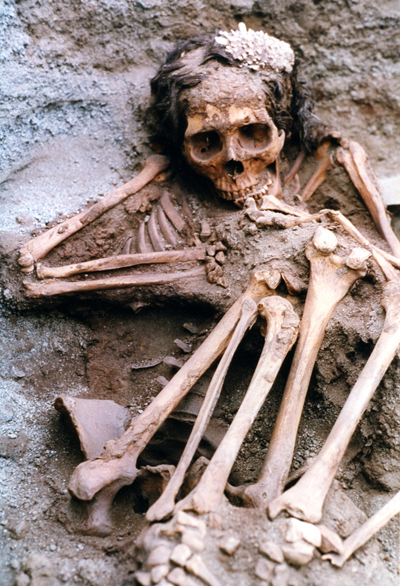 Human remains unearthed in Lima, capital of Peru, have yielded the first direct evidence of Inca deaths caused by Spanish conquerors around 500 years ago, says Melissa Murphy of the University of Wyoming in Laramie. In a report on Violence and weapon-related trauma at Puruchuco-Huaquerones, Peru, published in the American Journal of Physical Anthropology, Professor Murphy and her colleagues reveal skeletal evidence consistent with injury and death caused by 16th-century European weapons, including lances, hammers and firearms.

To the surprise of the authors, the remains lack bone evidence for sword injuries, even though historians have concluded from Spanish documents from the 16th century that steel swords were the standard military weapon. On the other hand, Murphy explains, ‘many of the Spaniards who helped Francisco Pizarro conquer the Incas were fortune-seekers and mercenaries, rather than soldiers’, which might explain the absence of sword injuries and the predominance of gunshot wounds.

Skeletons in the Inca cemetery, as well as at another grave site about a mile away, display a gruesome array of violent injuries, many probably caused by maces, clubs and other Inca weapons, the researchers report. Those weapons may have been wielded by members of those Inca communities known to have collaborated with the Spanish, or they might have been borrowed by the Spanish. ‘The nature and pattern of these skeletal injuries were unlike anything colleagues and I had seen before,’ Murphy says. ‘Many of these people died brutal, horrible deaths.’

Human remains from two different burial grounds in the Puruchuco-Huaquerones archaeological zone in Lima were examined, both dating from around AD 1470 to 1540, and hence close to the time when the Spanish captured the Inca emperor, around 1532. In one cemetery, bodies had been hastily deposited in shallow graves and some 30 skeletons had head and body injuries inflicted at the time of death, as indicated by a lack of healed bone; others may well have died of soft-tissue injuries that leave no skeletal record.

Several individuals had been subjected to extreme violence, having been shot, stabbed or struck repeatedly, perhaps indicating the desire to intimidate others into acquiescence, the report suggests.

One skull had radiating fractures consistent with damage produced by early guns that shot ammunition at low velocities, while another had three small rectangular openings in the back of the head that most closely resembled injuries from Medieval weapons tipped with steel spikes, like those from an English battlefield cemetery dating from 1461.

In the second cemetery, 18 out of 138 skeletons showed signs of violent death from Inca weapons, such as maces and clubs. It is possible, says Murphy, that the Spanish adopted Inca-style weapons, but more likely that their arrival triggered conflicts and civil war between Inca communities.