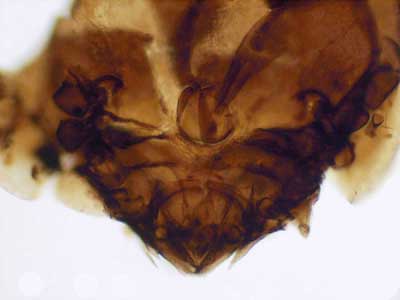 What has a tiny excrement-eating mite got to do with investigations into the rise and fall of ancient societies and even ancient empires? A whole heap, it would seem.

A study of the fluctuating numbers of fossilised oribatid mites is offering a tantalising glimpse into the changing fortunes of the Inca Empire. The Incas were one of the most advanced of all ancient civilisations, yet they maintained no written record, failed to invent the wheel and were all but wiped out by Spanish invaders in the first half of the 16th century.

Now, a team of researchers – including Palaeoecologists Dr Michael Frogley (University of Sussex), Dr Alex Chepstow-Lusty (CNRS, Montpellier) and anthropologist Professor Brian Bauer (University of Illinois at Chicago) – has been examining the relative numbers of fossilised oribatid mites in mud-cores from the sacred Inca lake of Maracocha, near Cuzco in highland Peru. The oribatid is important since this is a mite that favours the excrement of grazing animals and is typically associated with areas of moist grassland and pasture suitable for grazing. And the lake is a perfect source of information since it has unusually high numbers of fossilised mites -suggesting hundreds of years’ worth of animal droppings (washed into the lake, from animals drinking at the waterside) on which the mites were able to feed.

The sacred lake sat at the centre of the ancient Inca Empire, and indeed at the centre of the Inca’s large transport network that used lengthy caravans of llamas to ferry the State’s growing wealth. Of key importance is the fact that the mud core samples show fluctuations in the numbers of fossil mites over time. This is thought to correlate with the increases in the numbers of llamas present on the important trans-Andean trading routes that passed through Marcacocha while the Inca thrived – and with the plummeting numbers of native animals and people following the arrival of the Spanish. Mite numbers were shown to recover again during the late 16th and early 17th centuries with the introduction of familiar Old World domesticated animals, such as sheep, goats, horses and cattle, although this recovery was interrupted in the early 1700s as plague ravaged the region, decimating rural populations.

Spanish historical records corroborate the later conclusions so now the scientists plan to extend their research back into uncharted periods of pre-Incan history, where no other documentary records exist.

Examining fossilised mite numbers may also illuminate research into other environmentally sensitive areas of the world where human activity is tied to environmental and ecological trends. As Michael Frogley emphasised: ‘Before we developed this methodology, it was very difficult to find a technique that could chart the changing patterns of trade or livestock across a landscape. It could have more wide-ranging applications for understanding all sorts of cultural ups and downs such as the calamitous impact of Europeans on the New World.’

Even the smallest and most mundane of animals, such as excrement-eating mites, can provide a window onto our past.