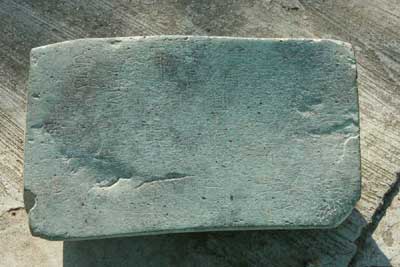 The oldest known writing in the Americas has been identified in Veracruz, Mexico. A total of 62 distinct symbols, some of which are repeated, have been dated to around 900 BC.

The characters have been carved across the surface of a 26-pound stone slab measuring some 36cm x 21cm x 13cm. The slab, known to researchers as the ‘Cascajal Block,’ was unearthed from a gravel pit by road builders in the late 1990s. However, it was only earlier this year that a seven-strong group of archaeologists from North America and Mexico travelled to the site to examine the block. As detailed in the journal Science, the symbolic writing system appears to have been left by the Olmecs, the first civilization in Mesoamerica (which includes much of Mexico and Central America). This is a highly significant discovery since it had been thought that the Olmecs did not use writing. Indeed, most glyphs have never been seen before, although a few are known from pieces of Olmec art – including depictions of an insect, maize, corn plants, a table-top altar, and a cross. The latter symbols are thought to have been important to the people and probably represented the four compass directions.

The characters appear to have been etched using two different instruments. As team-member Richard A. Diehl, Professor of Anthropology at The University of Alabama, explained ‘one of them must have been very sharp, and the other much broader. They were probably both stone implements.’ The writing seemingly runs in rows from left to right; this is unlike most other ancient Mexican writing systems in which the glyphs start at the top and go to the bottom in columns.

Interestingly, the side of the block containing the writings is concave, suggesting it may have served as a sort of blackboard: something which had been written on, erased, and written upon again. This writing and erasing may be responsible for wearing the hollowed form on one side. ‘This is a unique find, and because of this and other reasons, scientists may never be able to decipher the writings’, explained Professor Diehl. ‘It is the first time in a long time that a new writing system has been discovered. There may not be many more undiscovered writing systems around’, he enthused.

The carvings are put at 900 to 800 BC. ‘We dated the stone on the basis of the pottery that the people who dug it found nearby. Though this is not a water-tight method of dating, it is the best we have. Moreover, certain of the symbols occur on Olmec monuments at San Lorenzo, located a mere 2km away – and those monuments are known to have been carved and buried prior to 900 BC’, Diehl told CWA. Consequently, the symbols are understood to be some 400 years earlier than any other known writing from the Americas. ‘We are thrilled to have identified the oldest known writing in the Americas,’ Diehl said.

The latest finding confirms a suspicion Diehl raises in his 2004 book, The Olmecs: America’s First Civilization. ‘I started studying the Olmecs as a young man in the late 1960s, and for many years I have thought that a complex society such as the Olmecs must have had writing. However, until now, I never had any evidence to support that,’ Diehl said. ‘To finally have the physical evidence, to have held it in my hands, carried it, examined it, and photographed it, sort of brings a little closure to some of my ideas about the Olmecs.’