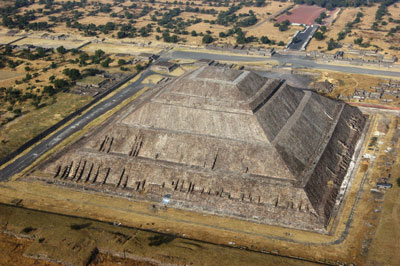 Archaeologists investigating the core of the Pyramid of the Sun, at Teotihuacan on the outskirts of Mexico City, have discovered the ceremonial offering placed at the heart of Mexico’s tallest pyramid, deposited when construction first began in about AD 50.

Laid on the pyramid’s rubble base, the offerings included obsidian knives and projectile heads, 11 ceramic vessels featuring the rain god, Tlaloc, and three anthropomorphic figures made from green serpentine. One of these was a delicately carved human face with eyes inlaid with pyrite and shell. Researchers also found the remains of three older structures beneath the pyramid, and seven human burials, some of them of infants.

A sea shell, three pyrite discs (one of them 450mm in diameter – the largest ever found at Teotihuacan), and a substantial number of animal bones were also found. The latter included the skull of a feline, placed to the north-east, a canine to the south, and an eagle to the south-east covered with volcanic rock.

‘At this stage we can only offer a general interpretation of the findings,’ says the Mexican National Institute’s report. The offerings to the rain deity Tlaloc, however, suggest that the Pyramid of the Sun, which covers about 5.6ha, may need to be renamed.