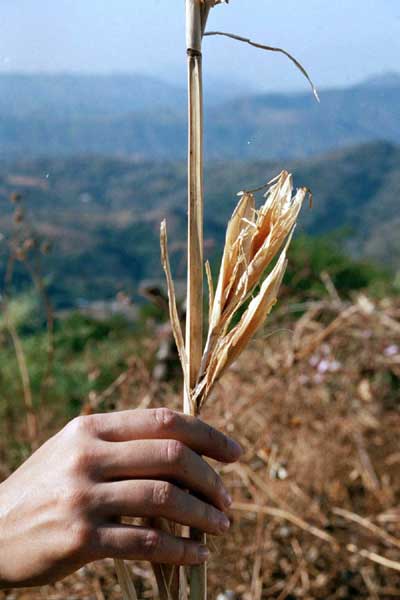 Among the hundreds of plants that have been domesticated in the Americas, arguably the most important is maize. Dolores Piperno, Archaeobotanist at the Smithsonian’s National Museum of Natural History, and Anthony Ranere, Professor of Anthropology at Temple University, Philadelphia, believe they have pinned down the earliest evidence so far for its domestication — in Mexico, and around 8,700 years ago. The same team’s earlier research in Panama found that domesticated maize had reached there by 7,600 years ago and was well established in much of northern South America by 6,000 years ago.

Piperno and Ranere were drawn to Mexico’s Central Balsas River Valley because that is where Balsas teosinte, the large grass that is genetically close to domesticated maize, grows in the wild. Evidence that they were on the right track came from sampling lake sediments for evidence of early agriculture: along with charcoal that was itself a by-product of forest clearance to create arable fields, they found the almost indestructible silica plant remains called phytoliths that are unique to domesticated maize.

Fifteen rock shelters and caves were also sampled for tools and plant remains. One site in particular, at Xihuatoxtla, produced grinding tools whose minute cracks and crevices contained the remains of domesticated maize starch from strata carbon dated to 8,700 BP (before present). Ranere is convinced that the actual date is earlier, but dating evidence is lacking for the earlier strata in which grinding tools with maize starch were also recovered: ‘We found maize starch in almost every tool that we analysed, all the way down to the bottom of our site excavations,’ he said.

According to Dolores Piperno, the new evidence ‘establishes tropical southwest Mexico as an important region where early agriculture occurred in the New World and adds maize to the roster of important cereals (along with wheat and barley from the Middle East) that were cultivated and domesticated by 9,000 years ago’.

Ranere also said that the team’s findings added to the growing body of evidence that seasonally dry tropical forests were important centres of early human settlement and farming, rather than in the arid highlands, as many researchers once believed. •