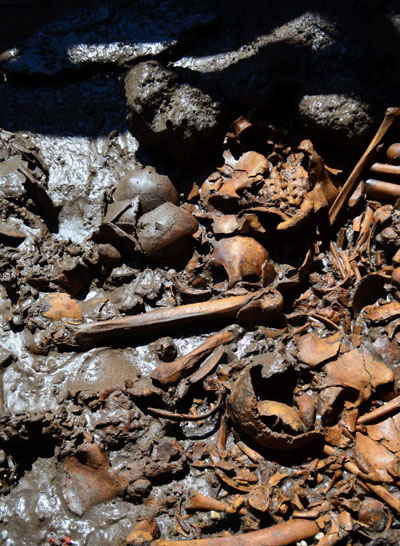 Construction work in the ruins of Tenochtitlan in Mexico City has uncovered a unique burial at the foot of the Aztec capital’s main temple: the skeleton of a young woman, surrounded by a jumble of almost 2,000 human bones.

Lying beneath a slab floor associated with the fifth phase of building at Templo Mayor (AD 1481-1486), the grave was found by archaeologists from Mexico’s National Institute of Anthropology and History (INAH) during the building of a lobby for the Archaeological Zone and Templo Mayor Museum.

Raúl Barrera, head of INAH’s Urban Archaeology Programme, said the 1,789 disarticulated bones include remains of adults, teenagers, and children. They are currently undergoing analysis to find out how many individuals they came from.

Some of the bones show possible cut marks to the sternum and vertebrae, which might indicate signs of human sacrifice.

Although the bones are scattered apparently randomly around the woman’s skeleton, some seem to have been sorted according to type. The skulls of seven adults and three children were grouped in one pile, while archaeologists also identified small clusters of long bones and ribs.

‘This discovery is one of a kind,’ Raúl Barrera said. ‘Although we have previously found other multiple burials from this culture, this is the first to show an adult skeleton accompanied by pieces of human bone from people of such a wide span of ages.’

He added: ‘We believe they may have been exhumed from somewhere else and reburied, though we will confirm this with dating analysis.’

About 35m from the burial, excavations also revealed the 7ft trunk of an oak tree, enclosed within a circular stone structure and dated to AD 1440-1469.

Raúl Barrera suggests that the trunk – which was located close to the shrine of Huitzilopochtli, the Aztec god of war – may have been one of the sacred trees of Tenochtitlan. These are described in the chronicles of the 16th-century Franciscan missionary Bernardino de Sahagún.

‘Bernardino de Sahagún reports that several trees had ritual significance within the sanctuary,’ he said. ‘Our findings appear to confirm what he describes, though investigations on this feature are continuing to clarify its relationship with the shrine.’