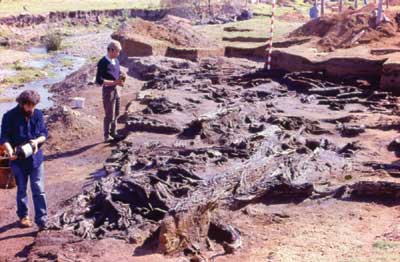 Cuds of masticated seaweed, dating from 14,220 and 13,980 years ago, have been found in hearths at the Monte Verde settlement in southern Chile. Some of the seaweed had been cooked and some had been mixed with other plants and chewed raw, perhaps for medicinal purposes. A month previously, scientists had obtained the date of 14,300 before present from human faeces found in an Oregon cave. Thus the Monte Verde finds reinforce the evidence for the Pacific Coast as an early migration route, with humans travelling from Siberia round the Alaskan coast and then southwards.

The peat-covered Monte Verde site lies some 36 miles from the Pacific Ocean, on a bank of the Chinchihuapi Creek, a tributary of the River Maullín. Discovered in 1975, it has been excavated since 1977 by Tom Dillehay, now Vanderbilt University’s distinguished Professor of Anthropology, and consists of a series of tent-like structures made from animal hides tied to a timber framework with ropes woven from reeds. Cooking took place over clay-lined brazier pits.

Dillehay and his team have established that the 20 to 30 people who lived in the village foraged for food and materials for tools over a range of 150 miles. Nine different species of seaweed and algae are represented at the site, along with shellfish, water plants from brackish estuaries, seeds, nuts and berries and the bones of two extinct animals, the elephant-like gomphothere and a species of llama.

Monte Verde has also produced much earlier carbon samples, dating from 33,000 years ago, but these could have resulted from natural forest fires or lightening strikes and have so far been discounted as evidence for human activity. Even so, the dates from the Oregon and Monte Verde sites bolster the so-called ‘long chronology’ model for the peopling of America, with migrants arriving in successive waves, perhaps by boat, from Asia and the Pacific islands – some have even suggested from as far away as Australia – much further back in time than has hitherto been allowed, rather than the ‘short chronology’ based on the overland arrival of post-glacial Clovis people some 13,000 years ago.