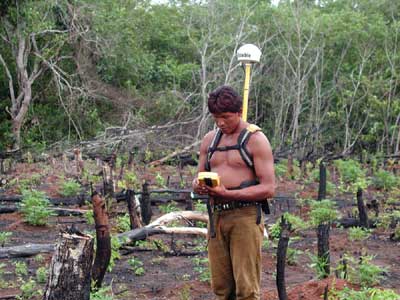 Far from the Amazon being virgin forest, it once supported a network of densely populated towns, according to Prof. Mike Heckenberger, from the University of Florida, in Gainesville, whose team has found evidence of a grid-like pattern of settlements connected by road networks and arranged around large central plazas in the Upper Xingu region of western Brazil. Fieldwork has also mapped evidence of farming, wetland management, and fish farms dating from the 13th century AD.

The members of Prof. Heckenberger’s field team used satellite images to locate settlements; they were further assisted by members of the Kuikuro tribe, direct descendents of the people who built the towns. Tell-tale traces on the ground include dark earth from middens and waste dumps, pottery and earthen structures, including the remains of walls.

Settlements were typically clustered in groups over an area of 60 hectares (150 acres), with larger walled towns dispersed at three to five kilometres intervals, their central plazas connected to each other by roads oriented north-east to south-west (aligned on the midsummer sunrise). The walled towns were each surrounded by smaller, non-walled residential hamlets. Two such clusters have been studied in detail, but 13 more have been identified in an area of more than 20,000 square kilometres – equivalent in size to the state of New Jersey or the Principality of Wales.

It is likely, says Prof. Heckenberger, that European colonisers arriving in South America in the early 16th century brought diseases that wiped out most of the indigenous population, resulting in the abandonment of this urban landscape. •