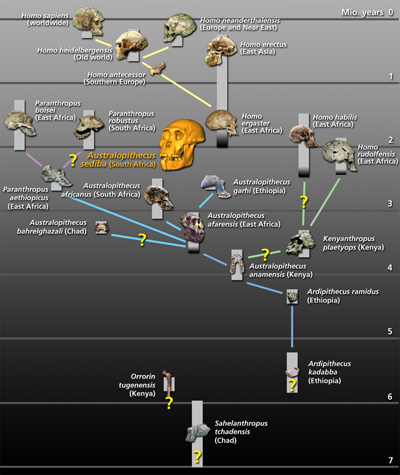 The long-standing debate about the relationship between humans (Homo sapiens) and Neanderthals (Homo neanderthalensis) has just taken an unexpected twist with the discovery that some humans have genes in common with our extinct hominid cousins.

Some anthropologists have always argued that this was the case, but on the questionable evidence of similarities in skull and skeletal structure. Others have argued that humans and Neanderthals are separate species and that interbreeding could not occur. Now Dr Ed Green of the University of California, Santa Cruz, and 50 other members of an international research team have published a pioneering study in the journal Science, demonstrating a ‘flow of genetic material’ between early Homo sapiens and Homo neanderthalensis.

What makes the evidence all the more compelling is the fact that the bits of the genome we share with Neanderthals are absent from sub-Saharan African genes, but present in human populations in all the other parts of the globe. The authors argue that for the Neanderthal genes to be so widespread, and to be present in parts of the world to which Neanderthals never migrated, including Papua New Guinea, interbreeding must have occurred very early in the chronology of human migration.

Very likely, the first human out-of Africa migrants, consisting of a handful of people, encountered Neanderthals – or perhaps some other hominid species that had a component of Neanderthal genes – somewhere in North Africa, Arabia or the Middle East. The authors do not speculate under what social circumstances interbreeding took place or whether or not it might have been consensual, but the gene flow was only in one direction – from Neanderthal male to human female. The Neanderthal genes of the subsequent progeny are thought to be present in a small but significant proportion – between one and four per cent – of the modern human population.

Academics specialising in hominid evolution are still digesting the evidence and pondering its implications, but most seem to agree that the discovery suggests a much more complex and crowded human family tree than our current model, perhaps with many more hybrid or intermediate subspecies or variants on the human species than we have yet discovered.

Chris Stringer, Research Leader in Human Origins at the Natural History Museum in London, commented that this was ‘an intriguing twist to our evolutionary tale; these surprising results are probably only the first of many, as the emerging science of fossil genomics builds up momentum’.