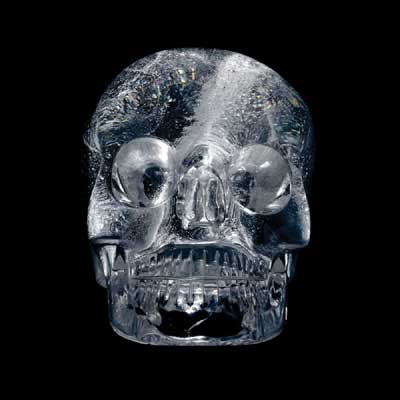 Stephen Spielberg’s newly released Indiana Jones film, the fourth to feature the intrepid archaeologist, follows the Harrison Ford character as he sweats through the South American jungle seeking to reunite a dispersed group of crystal skulls. Described as ‘from another world’, the skulls are said to hold a secret vital to the survival of the human race, which they will only reveal when brought together. Battling to get to the skulls first is Russian agent Irina Spalko, played with crystalline coolness by Cate Blanchett.

Indiana Jones’s head-hunting adventures mirror the quest of Jane MacLaren Walsh, an expert in pre-Columbian archaeology at the Smithsonian in Washington, who has spent nearly two decades seeking to uncover the truth about a group of real-life crystal skulls held by national museums in Europe and America. She concludes that many of the most spectacular examples were made, probably in Europe, using machine-driven rotary wheel grinders, burrs and polishers that were common in jewellery workshops in the latter part of the 19th century.

In researching the circumstances under which these skulls found their way into public and private collections, Jane MacLaren Walsh says that it is likely the earliest skulls were re-carved from genuinely ancient meso-American crystal beads at a time when ‘relic shops’ abounded in Mexico City filled with fake pre-Columbian artifacts. The name of Eugène Boban, the French explorer and antiquities dealer, is linked with a number of the larger and more spectacular skulls, some of which formed part of a large collection of Mexican archaeological objects that he displayed in Paris and Mexico in the 1880s, which Boban claimed were ‘Aztec’ artefacts, ‘from the Valley of Mexico’.

A fascination with the idea of human sacrifice combined with the fact that skulls do feature in meso-American art, usually carved in basalt as part of a relief carving attached to walls and altars, partly explains why, says Jane MacLaren Walsh, buyers were ready to accept that the crystal skulls were genuinely ancient at a time when the study of meso-American artefacts was it its infancy. The British Museum now exhibits its skull as an example of a forgery, but that does not diminish its interest as an historical artefact – one that is likely to be under the spotlight again, thanks to Indiana Jones. •