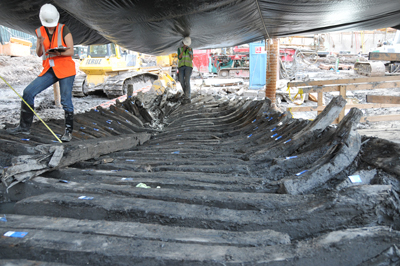 Astonishingly, given the devastating events that took place at New York’s World Trade Center on 11 September 2001, archaeologists working at the site have found a substantial depth of undisturbed archaeological deposits lying underneath the remains of the iconic twin towers. They include the remains of a Revolutionary-War-era ship that was probably sunk deliberately on the Hudson river bank as part of land reclamation work to extend Manhattan’s shoreline westward in the late 18th century.

Though discovered in July 2010, details of the ship have only now emerged, in a lecture given at the New York Academy of Sciences by Michael Pappalardo, senior archaeologist with AKRF (the firm that unearthed the boat), Norman Brouwer, maritime historian, and Nichole Doub, conservator with the Maryland Archaeological Conservation Laboratory.

Pappalardo said that the Ground Zero site had yielded thousands of artefacts from the late 1700s and early 1800s, including timber piles, food bones, glass and ceramic vessels, and hundreds of shoes, as well as timber piling. The boat, consisting of the rear end and bottom quarter of a two-masted brigantine, was a wholly unexpected find. A 32ft (9.7m) section has survived from the original length of around 70ft (21m). The vessel, the workhorse of its day, was used to transport cargo up and down the Hudson River and from port to port along the Atlantic seaboard.

‘We have found seeds, pits, and nuts on board,’ said Pappalardo. ‘They might have been what the ship was used to transport, or they might have been eaten by the people on the boat. We’re working our way through different scenarios.’ Remains of the tiny wood-boring Toredo worm, Lyrodus pedicellatus, have been found in the timbers: this warm-water species suggest that the boat might have traded as far south as the Caribbean, perhaps carrying cargoes of sugar, molasses, and rum.

The waterlogged ship emerged from a thick layer of organic material that preserved the timbers. Many years of study and conservation work now lie ahead, but in cleaning the timbers Nichole Doub’s team found a British halfpenny coin, issued during the reign of George II (1727—1760). ‘Placing coins in key structural elements of a ship is a tradition extending back hundreds of years,’ said Doub, ‘and one that still persists today: in 2008, coins were placed within the newly completed USS New York, the transport vessel built partly with steel beams from the destroyed twin towers, bringing the tradition full circle.’