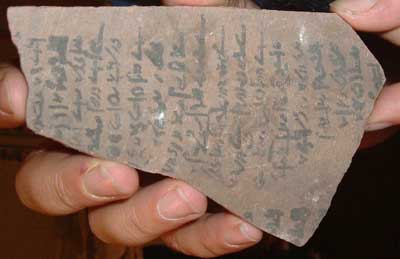 Kingston Lacy in Dorset is an elegant country house, built in the 1660s and set in acres of lush English countryside. When the National Trust acquired Kingston Lacy in 1982, it came with an untold amount of material to catalogue and collate, some of which was stored away for later investigation. During recent work in the house cellars, Robert Gray, House and Collections Manager, came across a crate that contains a surprisingly large number of ancient Egyptian ostraka, or inscribed pottery sherds. This collection of 212 ostraka includes over 100 tax receipts given by officials for poll tax, mortgages and income tax, and provides a fascinating glimpse into everyday life in ancient Egypt.

The ostraka form part of a considerable collection of Egyptian artefacts brought to Kingston Lacy in the 19th century by its then owner, pioneer Egyptologist, William John Bankes. Less expensive than using papyrus, parchment or pre-industrial paper, ostraka were used in Classical Athens as voting ballots to exile unpopular members of a community -who were thus ‘ostracised’ – but the term is now used for inscribed pottery fragments in general. The ostraka found in the Kingston Lacy cellars are believed to have originated from the island of Elephantine in Egypt. They vary in date, and a range of different languages and ancient scripts appear on them, although the majority date from 200 AD and are in Greek, an official language of Egypt at that time. Each of the ostraka has been photographed and sent to academics at the University of Leiden in Holland who have been translating the inscriptions. The researchers have found that among the receipts are payments by a farmer for poll tax, a loan for a mortgage to the son of an undertaker, income tax for the production of dates from an orchard, and payment for public utilities and services. At least 16 of the receipts were issued to the same person, ‘Patsibtis, son of Petorzmethis’. Along with the tax receipts, other ostraka in the collection are believed to include a record of priests who would have stood before the gods in the temple on a certain day.

Robert Gray explained ‘We believe that William John Bankes was referring to the ostraka when he wrote of having collected Greek ’tiles’ from his travels to Elephantine in Egypt. He was keen to have them translated and sent a number to a Cambridge scholar to be deciphered, but we have no record of him seeing or commenting on the results.’ Gray concluded: ‘It is fantastic that the ostraka have been rediscovered and that we can now add to our knowledge of Bankes and his collections.’