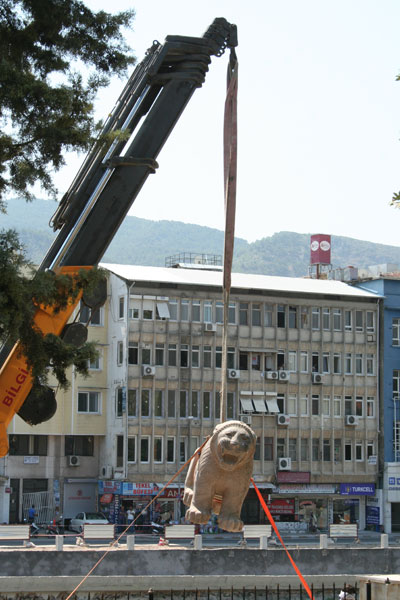 A superbly carved and intact lion sculpture, excavated by a Canadian team in south-eastern Turkey, is reminiscent of the lions excavated by British archaeologist Sir Leonard Woolley in 1911 at the royal Hittite city of Carchemish.

This lion was unearthed from the remains of a monumental gate complex at the entrance to the citadel of ancient Kunulua (modern Tayinat), capital of the Neo-Hittite Kingdom of Patina. It probably dates from between 950 and 725 BC.

Professor Timothy Harrison, leader of the University of Toronto’s archaeological project in the Tayinat region of south- eastern Turkey, said: ‘The lion is fully intact, approximately 1.3m in height and 1.6m in length. It is poised in a seated position, with ears back, claws extended, and roaring’. He added that a second piece found nearby depicted a human figure flanked by lions, ‘an iconic Near Eastern cultural motif known as the Master and Animals that symbolises the imposition of civilised order over the chaotic forces of the natural world’.

The find gives new insight into the cultural sophistication of the Iron Age city-states that emerged in the eastern Mediterranean following the collapse of the great Bronze Age powers at the end of the 2nd millennium BC. Such carvings on citadel gateways continued a Bronze Age tradition that accentuated the symbolic role of sphinxes and lions as guardians, and the role of the king as the divinely appointed gatekeeper to the community. ‘Such elaborately decorated gateways served as dynastic parades, legitimising the power of the ruling elite,’ says Harrison.