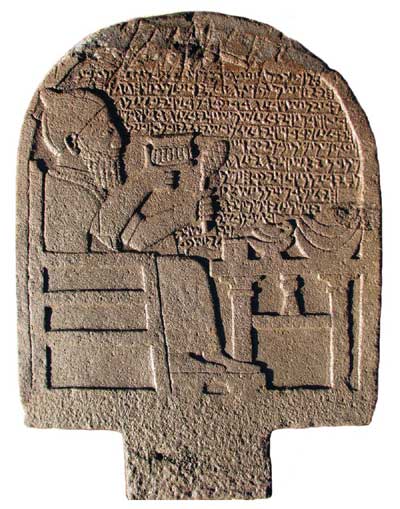 Archaeologists in South Eastern Turkey have discovered an Iron Age stone slab that provides the first written evidence in the region that people believed in a soul that was separate from the body. The 8th century BC stele, carved from basalt, was excavated intact in its original location by a team led by David Schloen, Director of the University of Chicago’s Neubauer Expedition to Zincirli, the site of the ancient city of Sam’al, once the capital of a prosperous Iron Age kingdom.

The inscription reads in part: ‘I, Kuttamuwa, servant of Panamuwa, am the one who oversaw the production of this stele for myself while still living. I placed it in an eternal chamber and established a feast at this chamber: a bull for [the storm-god] Hadad … a ram for [the sun-god] Shamash … and a ram for my soul that is in this stele.’

The stele was set against a stone wall in the corner of the small room that had been converted into a mortuary shrine for the royal official Kuttamuwa, who is depicted as a bearded figure wearing a tasselled cap and fringed cloak, raising a cup of wine in his right hand. He is seated on a chair in front of a table laden with food, symbolising the eternal banquet he no doubt hoped to enjoy. Beside him the inscription enjoins his descendants to bring food for his soul – and, indeed, remains of food offerings and fragments of polished stone bowls of the type depicted in Kuttamuwa’s banquet were found in front of the stele.

The significance of the stele lies in its evidence for the meeting of Semitic and Indo-European cultural traditions in a kingdom contemporary with ancient Israel located in the border zone between Anatolia and Syria. Kuttamuwa and his king, Panamuwa, have non-Semitic names, reflecting the migration of Indo-European speakers into the region centuries earlier under the Hittite Empire. Kuttumuwa’s inscription shows a belief in the enduring human soul which inhabited his stone monument, possibly because the remains of the deceased were cremated. By contrast, cremation was abhorrent in traditional Semitic thought, because the body and soul of the deceased were considered to be inextricably linked. •