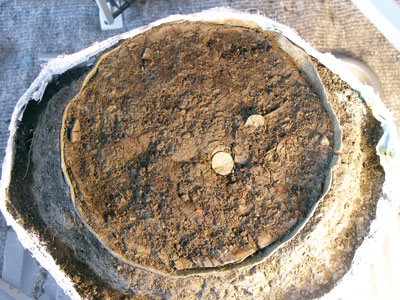 Archaeologists have unearthed several thousand silver objects, buried 1,000 years ago in Gotland, Sweden.
This is the second substantial hoard to have been found at the site: in 1838, almost 6,000 coins were found in the same field.

Museum of Gotland archaeologists Jonas Paulsson and Per Widerström made the discovery on the final day of a country-wide survey of sites thought to be threatened by looters. The copper bucket, filled with coins and at least one silver bracelet, was packed in a protective plaster case and sent to be x-rayed at the National Heritage Board in Visby.

Conservator Magnus Mårtensson told CWA the bucket is so densely packed with silver objects that his scans struggled to penetrate it. ‘This is only the first research to be undertaken. Further investigation will yield clearer results,’ he added. Per Widerström said that the artefacts were expected to number into the thousands, and that some of the coins had been minted in Cologne during the first half of the 11th century AD. ‘So far, two coins have been cleared from the soil,’ he told CWA.

‘One of them is a German coin from 1000-1040. The other is also German but its condition makes it difficult to say more.’ He added: ‘There is an organic layer on top of the bucket which might be a leather bag or a wooden lid. If it is a lid, there could be multiple layers in the hoard, as someone might have used it for storage, adding silver over time. But if it is a bag, it is more likely to have been just a pile of stuff in no order. Time will tell.’