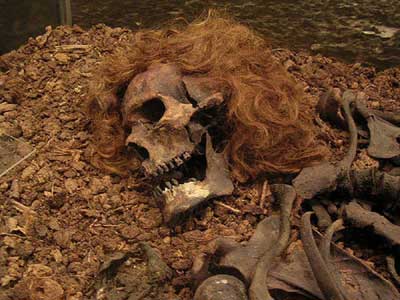 In 1936, a young lad found the bones of a 14th century man in the bog of Bocksten, south of Gothenburg, Sweden. Skull expert, Professor Claes Lauritzen, recently enlisted the help of doll maker Oscar Nilsson, to reconstruct the head of the ‘Bocksten man’.

By employing skills similar to those used in forensic medicine, they have created an idea of what the man looked like, his social status, and even, how he died.

The evidence indicates that Bocksten man died when he 30 to 35 years old, and had a rather grim death: the result of three blows to the head.

Why was he bludgeoned to death? This remains a mystery – but might his death have had something to do with his status? He died wearing a cloak – which had been preserved in relatively good condition – a coned hood, and wool trousers. This suggests he was a man of high social standing and two theories to explain his death are finding favour among researchers: that he was murdered for recruiting soldiers; or he was killed off for being a tax collector. (And you thought you disliked the Inland Revenue.)

Research on the Bocksten Man continues. As Professor Lauritzen explained: ‘We are still to determine what colour eyes or hair he might have had; and we also want to discover how the roofing material found in his chest might have contributed to his death.’

The reconstructed head of Bocksten man is currently on show at the Länsmuseet in Varberg, near Gothenburg, and close to where the body was found.