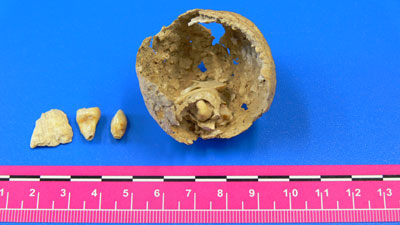 Archaeologists examining the 1,600 year-old remains of a woman from Roman Spain have made a unique – if grisly – discovery: a calcified ovarian tumour containing four teeth and a piece of bone.

Known as a ‘teratoma’, the spherical mass measured 4.3cm (1.7in) in diameter and was found in the right-hand part of the 30-40 year-old woman’s pelvis by researchers from the Autonomous University of Barcelona (UAB), during work at La Fogonussa, a 5th-century BC necropolis in modern Catalonia. Two teeth were loose inside the growth, with two more enclosed by a lump on its inner surface.

From the Greek teras (‘monster’), and onkoma, (‘swelling’), teratomas are tumours containing organic material such as hair, bone, teeth, and tissue. They rarely survive in the archaeological record, and where examples have calcified, as in this case, they can easily be mistaken for other pathologies such as kidney or bladder stones, or for rocks. Published in the International Journal of Palaeopathology, this is the first-known ovarian teratoma found in an individual from Antiquity.