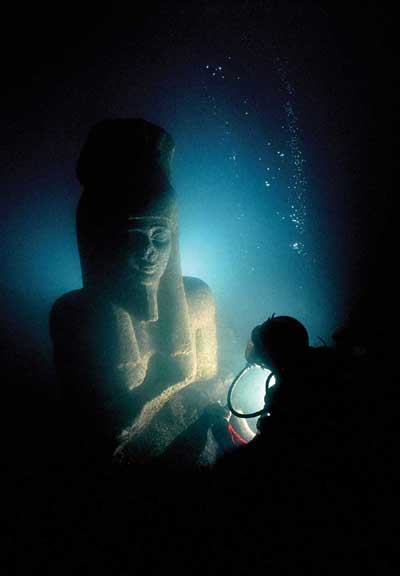 Beneath the waves, off the coast of the modern city of Alexandria and in the Bay of Aboukir, marine archaeologists have been hard at work. They have discovered long-lost places, some shrouded in legend, including the ‘mythical’ city of Heracleion, parts of the city of Canopus, and the ancient harbour of Alexandria together with parts of its royal quarter. To celebrate these discoveries a major exhibition, comprising around 500 objects found during the underwater campaigns, will be on show at Madrid’s Matadero Legazpi from 16 April to 28 September 2008.

The exhibition entitled ‘Egypt’s Sunken Treasures‘ or ‘Tesoros Sumergidos de Egipto‘ in Spanish, premiered in Berlin in 2006 and then moved to France. To date, it has attracted over 1.5 million visitors.

The man behind the discoveries on display is underwater archaeologist Franck Goddio. Since the early 1990s, Goddio and his team have used state-of-the-art technology and painstaking work in their discovery of the drowned sites. In the course of their work, they have recovered superb treasures, including monumental statues, jewellery, coins and cult objects from the seabed.

Why, one might ask, are these objects on the seabed? And more to the point, why did these cities sink? One suggestion is that the sites perished as the result of massive earthquakes in the 6th or 7th centuries AD; but for further theories, take a look at Underwater Archaeology in the Canopic Region in Egypt by Jean-Daniel Stanley, Oxford Centre for Maritime Archaeology, 2007.

Major disasters certainly make for good archaeology (we archaeologists are a cheery lot), and, with respect to Heracleion, the team found a city frozen in time. The sea hid a well-preserved city replete with temples, houses, streets, the port infrastructure, plus sphinxes, huge statues including a Granite statue of a Ptolemaic queen dressed as the goddess Isis, jewellery and other small finds. Though ancient writers such as Herodotus described Heracleion, until Goddio’s discovery many thought the city to be the stuff of make-believe. After all, Greek mythology mentions how Menelaos, King of Sparta, rested in Heracleion after recapturing his wife Helen from Paris in Troy. Goddio’s work, however, demonstrates that this was a thriving city from its establishment at around the 7th century BC until its drowning some thousand years later.

The exhibition showcases finds not only from Heracleion, but also from the sunken Eastern Harbour of Alexandria, and Canopus. Together they offer a tantalising glimpse of 1,500 years of Egyptian history. ‘The finds reflect the importance of these three sites, which were once all famed centres for trade, science, culture and religion. It is marvellous that the treasures are now on tour and that the public can see some of the wonders that we have been finding beneath the sea’, said Goddio.