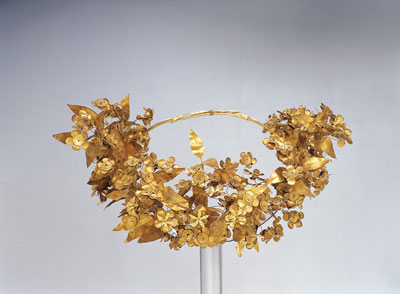 Excavation following the discovery of the tomb of Philip II in Vergina (see p20) posed two huge problems: how to preserve the tomb, and how to present the finds to the general public. The solution was remarkably simple: build a museum, and then bury it within a new mound. Unlike the original design, this time the covered buildings have been centred within the mound, rather than off to one side, and two ramps lead down into it. Inside, the structures and artefacts are on display. The result? The museum at Vergina bears an uncanny resemblance to the original mound in which Philip II was buried, and Angeliki Kottaridi, the ephor in charge of archaeology in Macedonia, has been able to create a stunning new presentation. It is one of the great museums of the world.
The centrepiece of the display is formed by the two great shaft tombs. It was decided to backfill the barrel-vaulted chambers, and concentrate the display on the grand ceremonial shaft entrance to the tombs, so that visitors can go down the two separate approach ways to be confronted with the doors to the chambers and the painted frieze above them – still among the finest examples of Greek painting despite their 2,000 years under the soil. The layout of the tomb and its contents are only revealed by a model placed near the entrance. The display space for the finds and the other tombs has been formed by four interlocking hexagonal housings.
As one enters, on the left is a row of tombstones, the remains of those overthrown by the Celtic invaders in 275 BC, reburied under the later mound. At first, it is tempting to ignore them, but then one realises what is unique about them: they are mostly painted, which is how most Classical tombstones would have looked. But here the painting has survived, providing a unique insight into the ancient world.
Further on is the Tomb of the Freestanding Columns, which had been almost completely destroyed. This is difficult to understand, at first, as it is approached from the rear; but, as one walks all the way round to the front of the tomb, it is an invaluable way to see how these tombs worked, with an elaborate doorway at the front leading through to the chamber behind.
Beyond it, there comes the Tomb of Persephone and the large stone blocks that formed a shrine, possibly a heroon (shrine dedicated to heroes), built into the back of the now-vanished mound of the Tomb of Persephone. This tomb is a rectangular chamber built of huge monoliths, and can be seen from the top through a gap in the roof. It had been totally robbed of artefacts, but the paintings on the three sides of the walls survived. They have been removed and placed on the walls at the end of the museum display. The highlight in the centre is the great painting showing the Rape of Persephone, symbolising the rape of life by death, as Hades, god of the underworld, carries off a distraught Persephone (this is reproduced on p21). The wall paintings are of considerable artistic merit, and it has been suggested that they could be the work of the famous painter Nikomachos.