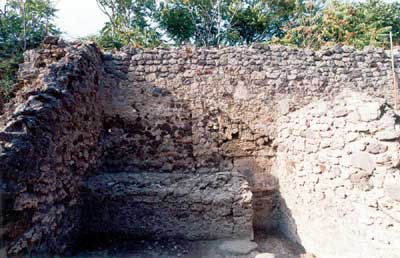 New research has revealed that Pompeii has a very ancient past and that the erstwhile occupants might have suffered a similar fate to the AD 79 dwellers.

The Swedish Pompeii Project, tied to Stockholm University and the Swedish Institute in Rome, has just completed its fifth season of excavations at Pompeii. Its excavations revealed previously unknown prehistoric settlements under the ancient city.

The discovery was made as the team excavated a well shaft. As they removed vast amounts of pumice stone from the AD 79 eruption of Vesuvius, they came across some unexpected artefacts: 2m below Pompeian ground level, the wall of the well shaft revealed a prehistoric stratigraphy. A thick layer of sterile soil containing ash and pumice covered this unexpected find.

There are two prehistoric layers, rich in sherds, separated by a dense ash layer, approximately 10cm deep. Grains of emmer-wheat were taken to Oxford University for analysis by a British archaeobotanist, Mark Robinson, who collaborates with the Swedish team. These have subsequently been C14 dated to about 3500 BC. The ash probably attests to an earlier volcanic eruption. ‘The plan is now to continue the study to find out how extensive the Prehistoric settlement was,’ said project leader Professor Anne-Marie Leander Touati.

The work requires drastic measures, since the ancient street pavement must be removed to make it possible to excavate a wider area than the narrow space around the well allows. The team will renew their excavations in September 2005.