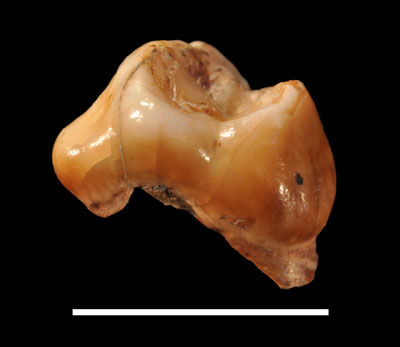 A 45,000-year-old toddler’s milk tooth, found in southern Italy, is evidence of the first modern humans to reach Europe. Stefano Benazzi, of the University of Vienna, and Katerina Douka, from Oxford University, and colleagues, have identified two milk teeth as being early modern human rather than Neanderthal, as previously believed. Both are molars: one belonging to a child as young as two; the other is more worn and has no root, suggesting it was lost by an older child as an adult tooth pushed through.

Both teeth were found in 1964, at the Grotta del Cavallo site in archaeological layers described as ‘Uluzzian’ – a culture characterised by personal ornaments, bone tools, and pigments that are typically associated with modern human behaviour. However, because the teeth were originally identified as Neanderthal, the associated Uluzzian culture was attributed to Neanderthals rather than early modern humans. This theory is now being revisited as a result of these findings, along with accepted hypotheses on Neanderthal technological advancement, culture complexity, and interaction with early humans.

The two teeth were analysed using digital- scanning methods, and these scans then compared with a wide range of other human remains. Dr Benazzi explained: ‘The thickness of the enamel and the outline of the crown show that these are definitely modern teeth, not Neanderthal.’

The teeth were too small and lacked the collagen necessary for radiocarbon dating; so Dr Douka developed a new technique using tiny fragments of ornamental marine shells that came from the same Uluzzian layers. ‘Radiocarbon dating of Palaeolithic material is difficult because the levels of remaining radiocarbon are very low and contamination can be a serious problem; our new approach using marine shell eliminates this issue,’ she explained. The results showed that the modern human teeth must date to between 43,000- 45,000 years ago, and are forcing a rethink about the earliest migration and dispersal of Homo sapiens into Europe, as well as how long they co-existed alongside their Neanderthal cousins.