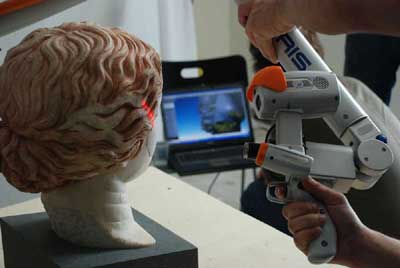 A painted Roman statue is being digitally restored to her original glory by scientists from the Universities of Southampton and Warwick, and the Herculaneum Conservation Project. The statue represents a wounded Amazon warrior. Discovered in 2006 in the ruins of the Roman basilica at ancient Herculaneum, it retains patches of its original paint around the hair and eyes.

Southampton’s Dr Graeme Earl explained that the organic pigments are exceptionally well-preserved because of Herculaneum’s burial under volcanic ash from the same eruption of Mount Vesuvius that buried nearby Pompeii in AD 79.
Dr Earle and his team at the Archaeological Computing Research Group are using high-resolution laser scanning to provide a detailed record of the texture and colour of the painted surfaces, accurate to within 0.05 of a millimetre. That data is then used to create a three-dimensional model of the head, revealing even the smallest detail, which can be ‘re-painted’ using computing techniques derived from the film industry.

The result, says Dr Earl, is ‘not just a pretty picture – this visualisation will provide us with an otherwise impossible view of how the original statue may have looked in context. Statues from this period with surviving paint are unusual and digital technologies offer a host of new possibilities for working with experts in Roman sculpture and painting from around the world in order to produce the most accurate simulations possible’. •