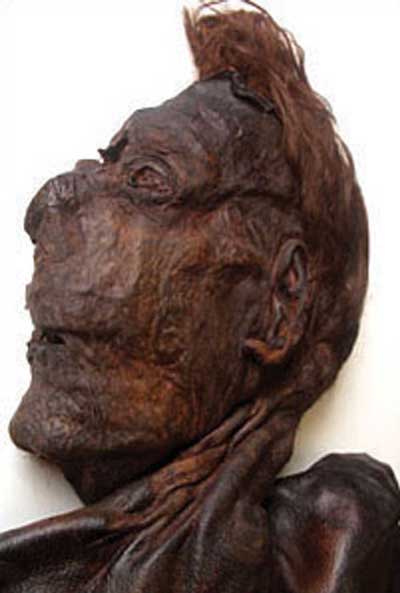 Archaeologists have just made public two Iron Age ‘bog bodies’ which were found in the Republic of Ireland in 2003. The first – dubbed Clonycavan Man after the area near Dublin in which he was found – was revealed by a peat cutting machine in February 2003. His forearms, hands and lower abdomen were missing, probably having been hacked off by the machine.

The second was found in May 2003 in Croghan, about 25 miles (40km) from Clonycavan. Old Croghan Man, as he has become known, was missing his head and lower limbs. He was discovered by workmen clearing a drainage ditch through a peat bog.

The chemical composition of the peat bog has meant that the bodies have been preserved in such a way that though the skeleton decalcifies, the skin is preserved. It is as though the body becomes tanned by peat-building sphagnum moss, explained bog-body expert Prof. Don Brothwell of York University. Moreover, once the moss embeds in cold, acid and oxygen-free conditions, it prevents bacterial action.

The well-preserved bodies consequently reveal plenty of information about their lives and deaths, which radiocarbon dating has put at around 2,300 years ago.

Clonycavan man died young and in horrific circumstances. Beneath his hair, which retains its unusual ‘raised’ style, was a massive wound caused by a heavy object that smashed open his skull. It is thought that he was probably slain in a brutal ritual sacrifice. Chemical analysis of his hair showed a diet rich in vegetables in the months leading up to his death, suggesting he died in summer. He also had been using a type of Iron Age hair gel – a vegetable plant oil mixed with a resin that had probably come from south-western France or Spain.

The headless Old Croghan Man also died young: he was probably aged in his early to mid 30s when he was put to death in yet another apparently ritual killing. He too had been tortured before death – his nipples had been cut and he had been stabbed in the chest. A cut on his arm suggested he had tried to defend himself during the attack that ended his life. In an horrific act, he had been beheaded and dismembered. His arms were tied by hazel ropes before he was buried in the bog.

Based on the length of his arms, it has been suggested that Old Croghan Man would have towered at around 6ft 6in tall – making him much taller than his 5ft 2in tall counterpart. Analysis of food remains in his stomach show that he had eaten milk and cereals before he died; while chemical analysis of his nails showed that he had more meat in his diet than Clonycavan Man. Together, this evidence suggests that he died in a colder season than Clonycavan Man, when vegetables were in lesser supply. It may also explain why his remains are better preserved.

The researchers used digital technology to reconstruct the distorted face of Clonycavan man for a BBC episode of Timewatch shown in January 2006. The bodies will go on permanent display in the National Museum in Dublin, probably from late May 2006. Readers may be interested to know that Professor Tim Champion will be leading a tour arranged by Andante Travels to Ireland in early July 2006 that will take in the National Museum in Dublin.n