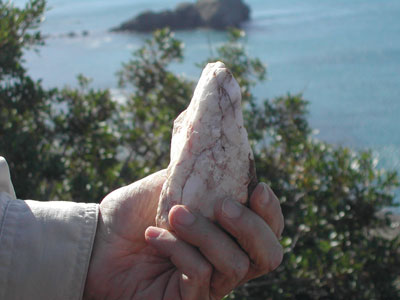 Crete has been an island for five million years – so the discovery of artefacts that are at least 130,000 years old on the island implies that pre-modern humans, such as Homo heidelbergensis, must have been long-distance seafarers.

Thus reason the members of a team of archaeologists led by Professor Thomas Strasser, of the Department of Art and Art History at Providence College, USA, and Dr Eleni Panagopoulou, of the Greek Ministry of Culture, who have found Lower Palaeolithic stone tools at nine sites on the island. Up to 300 pieces have been found at each site, and the geological contexts at five of the sites have allowed them to date the sites to at least 130,000 years ago, though some of the handaxes, cleavers and scrapers could be much older, as they closely resemble hand axes fashioned in Africa about 800,000 years ago by early hominins.

To reach Australia, some 50,000 years ago, modern humans had to cross the sea from Indonesia to Australia, as they did at an earlier date to settle the Indonesian island of Flores, but, says Professor Runnels, of the Boston University Archaeology Department and the Palaeolithic expert on the Plakias survey team, these finds ‘push the history of long-distance journeys by sea back by more than 100,000 years, with implications for the dispersal of early humans out of Africa’.

The team is surveying caves and rock shelters near the mouths of freshwater streams along a stretch of the south-western coast of Crete that faces Libya. The journey from Africa to Crete would have involved an open-sea crossing of some 200 miles.

The Cretan finds add to a growing body of evidence for early sea journeys: tools that look Palaeolithic have been made on the island of Gavdos, off the south coast of Crete, and the much earlier date of 1.3 million years ago has been proposed for occupation at Atapuerca, near Burgos, in northern Spain, perhaps the result of a relatively short sea journey across the Straits of Gibraltar.

Sceptics of the idea of deliberate voyages have suggested that early humans reached islands accidentally, having been blown out to sea by storms on rafts built for coastal voyages. Arguing against that is the sheer quantity of material found during the Plakias survey, which suggests a substantial number of people made the journey.