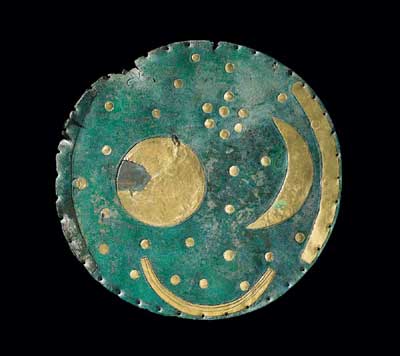 An amazing Bronze Age ‘sky-disc’ (Himmelsscheibe), shown left, has been discovered near the town of Nebra, in Central Germany. The disc, which is 32 centimetres (virtually one foot) in diameter and weighs about 2 kg, is made of bronze and is inlaid with decoration made of gold leaf.
There are five major objects. The most prominent is a large circle, which has mostly been interpreted as being the sun, though there have been suggestions that it could be the full moon. Then there is a crescent that appears to represent the moon. At the bottom there is a semi-circular strip, which has been interpreted as a ‘sun ship’ on an analogy with the sun ship known in Egyptian mythology. Finally, at either side there are two opposing strips, each covering 82 degrees of the whole circle. This is significant as 82 degrees marks the distance the sun travels between mid-summer and mid-winter – it is also the distance between the positions of the ‘station-stones’ at Stonehenge. In addition to the major strips, there are also some 32 smaller dots, which are thought to represent stars. A group near the top of the disc has been interpreted as representing the Pleiades. An interesting, if unlikely, suggestion is that the disc could have been smeared with rotten eggs in antiquity, which would have caused a chemical reaction on the bronze surface, turning it a deep violet colour, thus simulating a night sky out of which the gold-embossed stars would have shone.
Almost as sensational as the disc itself are the events surrounding its discovery. The sky disc was part of a group of artefacts found by looters in Sachsen-Anhalt either near Nebra or possibly near Sangerhausen (30 km apart) in the late 1990s. With it were two swords with gold foil ornaments, two axes, one chisel, and fragments of arm spirals, all dated to about 1600 BC. The finders reported none of the finds, and instead attempted to sell the disc on the black-market.
But thankfully, illegal antiques dealing is a risky business and in February 2003, the police set a trap for the group. In a series of events that would sit well in any Ian Fleming novel, the gang-members were lured to meet what they believed to be a prospective buyer in the basement of the Hilton Hotel in Basel, Switzerland. The cache was seized and proceedings have been opened against the finders.
The disc is now being studied by a team led by Professor Ernst Pernicka of the Institute of Archaeometry at Freiberg and Dr Harald Meller of the State Museum for Prehistory at Halle. They are working hard to demonstrate the integrity of the sky disc, and say its authenticity is confirmed by the way in which the object has genuinely corroded with age, rather than simply been made to look old by forgers. A date of 1600 BC has been inferred, based on the dating of the swords and the axe.
Although there is some uncertainty over where the disc was found, the suggested find-place is on the Mittelberg, a low hill in the Ziegelrode Forest surrounded by a Bronze Age ‘ringwall’ (i.e. a hillfort), near the town of Nebra – some 180 km south west of Berlin. The disk appears to have come from a pit which went down about half a metre into the soil, leaving loose stone walls standing. The area certainly appears to have been one of considerable ritual importance, as the nearby forest contains about 1000 known barrows of this period.