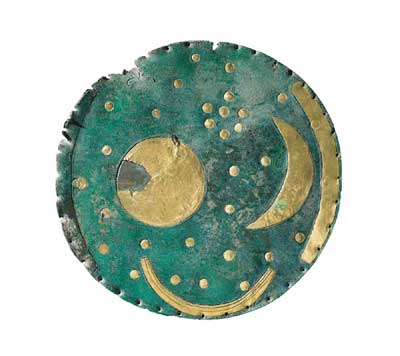 The intriguing Nebra Sky Disc has been hailed as one of Germany’s most acclaimed archaeological discoveries. But now the Bronze Age dinner-plate sized disc, dotted with gold shapes thought to represent the stars and planets of the night sky, is at the centre of a mighty dispute following claims that it is a forgery.

The question of the authenticity of the disc is part of an ongoing court case following the conviction of the metal detectorists who tried to sell the disc to various German museums for a cool million Deutschmarks back in 1999. They allegedly found the disc, along with two ancient swords and jewellery, in a muddy field close to a prehistoric hill fort near the east German town of Nebra. After a tip-off from the museums to which the detectorists tried to sell the disc, police in the Swiss city of Basel eventually arrested the pair and they were convicted of handling stolen goods. The duo are now appealing against the sentence, arguing that if the disk is a fake they should not have been convicted in the first place.

In court, arguing that the disc is indeed a forgery is archaeologist Professor Peter Schauer of Regensburg University. He was called to court as an expert witness following his letter to the Frankfurter Allgemeine newspaper last November in which he argued that the disc was nothing more than an amateurish forgery. Commenting on the ancient-looking green patina, Professor Schauer said it was not old at all, and had probably been artificially created in a workshop using acid, urine and a blowtorch. As for the indentations on the side of the disc, he suggests that they were not made by a Bronze Age tool but were done by machine. ‘My colleagues don’t want to believe it. But there is little doubt that the disc is a fake’, he contends.

While this comes as music to the ears of the detectorist duo, the news is troublesome to Germany’s curatorial establishment who had welcomed the disc as a splendid artefact – the oldest-known concrete representation of the cosmos, and a key find in interpreting Prehistoric astronomical and religious ideas. Consequently, other experts have poured scorn on the professor’s testimony. ‘An examination of the patina confirms its ancient origins. I have no doubt that it does indeed come from the Bronze Age’, Professor Josef Riederer told the court.

However, though dismissing the disc, Professor Schauer does not necessarily see it as a modern forgery wrought by the two crooks. The disc, he posits, could have been manufactured by shamans from Siberia, and is probably no more than ‘two or three hundred years old’. Asked whether he might be wrong, he replied ‘I spent 19 years examining finds from across the ancient and Roman world. I know what I’m talking about’.

Whatever the case, the disc has certainly been a visitor sensation, with thousands of Germans having already flocked to an exhibition in Halle to see the disc.